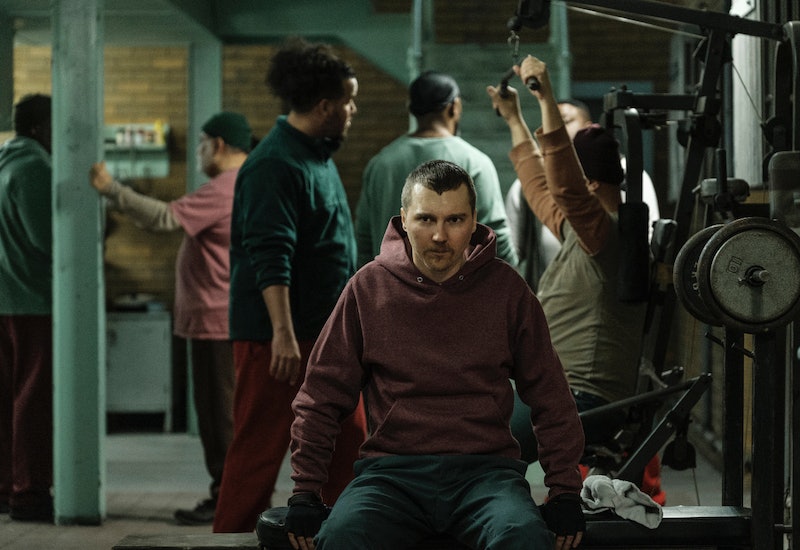 Like The Shawshank Redemption, Showtime's Escape at Dannemora depicts a successful prison jailbreak. Except, unlike Shawshank, the inmates never made it to Mexico. The series follows real-life inmates Richard Matt (Benicio Del Toro) and David Sweat (Paul Dano), who tried and succeeded to break out of the Clinton Correctional Facility in 2015. And although the two men were ultimately stopped, viewers may not know the details of how David Sweat was captured. It's been a few years, after all.

As a bit of background, Sweat had been serving a life sentence without parole after being convicted for the murder of Deputy Sheriff Kevin Tarsia in 2002, according to the New York Times. He'd been housed at the Clinton Correctional Facility since 2003, the Times continues, while Matt was there since 2008. Per the official police report, authorities believe Sweat and Matt began plotting their escape in January 2015 with the help of prison employee Joyce Mitchell (portrayed by Patricia Arquette in the Showtime series) and prison officer Gene Palmer (David Morse), both of whom plead guilty to and were convicted for their roles in the escape. After acquiring hacksaw blades and cutting holes in their cell walls, Sweat and Matt ultimately escaped through a manhole on June 5, 2015, according to the same report.

It took three weeks for the men to be captured. Matt was shot and killed by a SWAT team on June 26, 2015, per ABC, while Sweat was recaptured in Constable, New York, on June 28, 2015, according to the official police report. He was shot twice in the torso by a New York State police sergeant who CNN identified as Jay Cook. "[Cook] realized that Sweat was going to make it to a tree line and could have possibly disappeared," New York State Police Superintendent Joseph A. D'Amico said, per the same article. "He did an excellent job. I think he did a very courageous and brave act of policing."

According to a report from ABC's 20/20, Sweat had been traveling under cover of night but eventually moved to the daytime, which is when Cook spotted him in an alfalfa field. "I still can’t believe it's over and nobody got hurt," the police officer's mom, Judy Cook, told the Press-Republican. "We're very proud of our son, and we're very happy." According to the police report, the three-week manhunt for Matt and Sweat cost New York state $23 million in overtime and an additional $573,000 on prison repairs and security upgrades.

According to the same 20/20 report, Sweat was taken to a hospital in Albany for medical treatment after being shot, where he reportedly bragged to police that he was responsible for his and Matt's escape plan. "Sweat seemed to be the mastermind, not only of the escape, but the leader, if you will, when he got out," New York State Police Maj. Charles Guess told the ABC News show.

As a result, Sweat ultimately plead guilty to the incident and had three to seven years added to his original life sentence, according to the New York Times. Per another New York Times report, Sweat was later moved to the Special Housing Unit at Five Points, where he was kept in his cell for 23 hours a day. So although the real-life Sweat has been captured, it will be interesting to see how Showtime deals with the incident. If it's true to life, viewers may see Sweat being taken down by Jay Cook in an alfalfa field in Constable, New York.