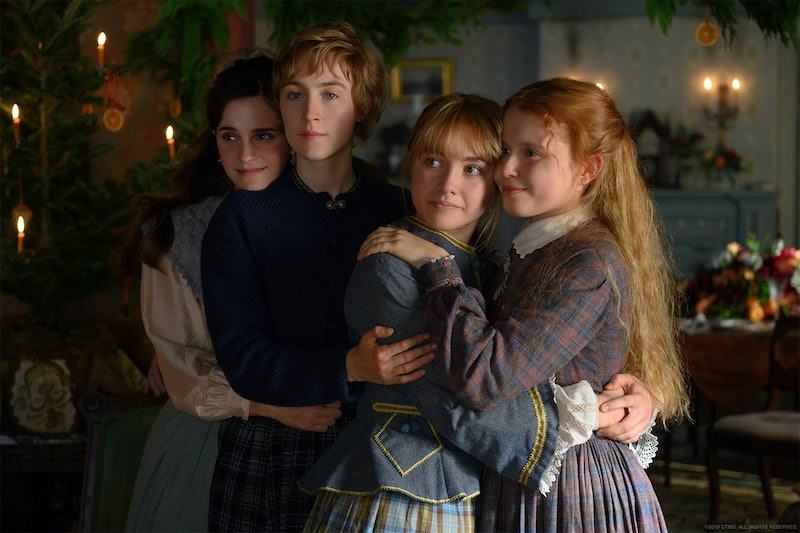 The new movie Little Women basically consists of Saoirse Ronan, Emma Watson, Florence Pugh, Timotheé Chalamet, Laura Dern, and Meryl Streep dressing in adorable vintage clothes and fighting to defy gender norms in the 1800s — what more could you possibly want? And not only is director Greta Gerwig's film adaptation of the Louisa May Alcott's 1868 novel true to the characters, Little Women was also filmed where the classic book was set, in the historical town of Concord, Mass.

Although the seven previous film adaptations of Little Women were shot in other locations or soundstages, Gerwig said that filming in Concord, where the fictional March family resided and near where Alcott lived, was a huge priority to execute her vision for the film. “To shoot in Concord, in Massachusetts, in this area, in this environment, was really essential in how I wanted to build this movie,” she told the Boston Globe. "The place matters as much as anything. The same way it was meaningful to shoot ‘Dunkirk’ at Dunkirk, it was meaningful to shoot this movie here.”

The cast and crew didn't even travel to other locales for specific scenes. The entire production was centered in Massachusetts, and some of the state's most notable landmarks were weaved into the story, including Boston's Colonial Theatre and Harvard's Fruitlands Museum.

The cast and crew embraced Concord as well, with Ronan especially valuing that she got to film in the same city where the book takes place. "It gives gravity to what you're doing," she told Vanity Fair. "The physical place really reminds you of the story you're trying to tell." Chalamet also knew how much the film's presence in the area resonated with the locals. "We’re shooting in the Massachusetts area where it was written, so we have a lot of people on the crew or that are just around that, the book is very dear to their heart and to their youths, as well," he said to Variety in 2018.

Gerwig and all of the actors also took full advantage of Concord, with everyone from Watson to Streep being seen at restaurants, bookstores, and gift shops in the area, according to Vulture. In case you were wondering, Ronan and Chalamet reportedly frequented Asian-fusion joint Karma, while Streep ordered chicken parmesan from Fiorelli's. So if you decide to visit these all-important locales, now you know the truly important information.

More like this
Howard Stern's Net Worth: Is He The Richest Man In Radio?
By Hugh McIntyre
At 14, Jenny Han Wrote Rom-Coms About Her Friends & Fan Mail To Leo DiCaprio
By Alyssa Lapid
Jurnee Smollett’s Heart Is Healing
By Rebecca Carroll
Kimberly J. Brown & Daniel Kountz Looked Back On Their ‘Halloweentown’ Romance
By Stephanie Topacio Long
Get Even More From Bustle — Sign Up For The Newsletter