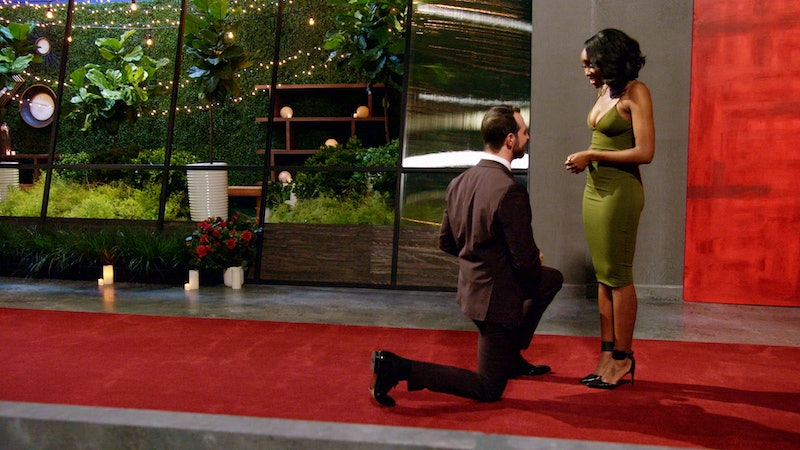 Netflix's latest dating "experiment" is one of the most bonkers reality shows yet. Two strangers are placed in futuristic looking pods and bond, without ever actually seeing each other. It kind of looks like Love Is Blind was filmed on a space ship, but, fans will be relieved to hear that this was not the case. The show hosted by Nick and Vanessa Lachey actually had two different filming locations during the first season — and one was actually very familiar.

It turns out, the pods weren't in a galaxy far, far away, but on a lot in Atlanta Georgia. A Netflix rep confirmed to Bustle that the pods and post-engagement living was filmed in Atlanta, and most of the contestants were from the area. According to Oprah Magazine, the pods were built inside a custom-designed set. After contestants took the plunge and got engaged, the couples were then whisked off to the Gran Velas Riviera Maya resort in Cancun, Mexico, to celebrate their engagements, per TheCinemaholic.

At the beginning of the season, men and women began looking for love via "blind" speed-dating. They entered their own individual pod, where they had conversations with a fellow contestant without ever actually seeing one another. The overall goal was to fall in love, get engaged, and say "I do" all in the matter of 38 days. As a whole, filming took about seven weeks total.

Following the engagement trip, the couples returned to Atlanta and lived in the same apartment complex, per Refinery29. It makes sense that the show would be filmed relatively close to home for the contestants. If they end up staying engaged and actually follow through with the wedding, at least the couples don't have to worry about moving to a new city.

The Season 1 finale drops on Netflix the week of Feb. 27, so there's still plenty of time to marathon the addictive series before it comes to an end. If Love Is Blind scores a Season 2 renewal, it's unclear if filming will continue in Atlanta or if a new city will take on the experiment.