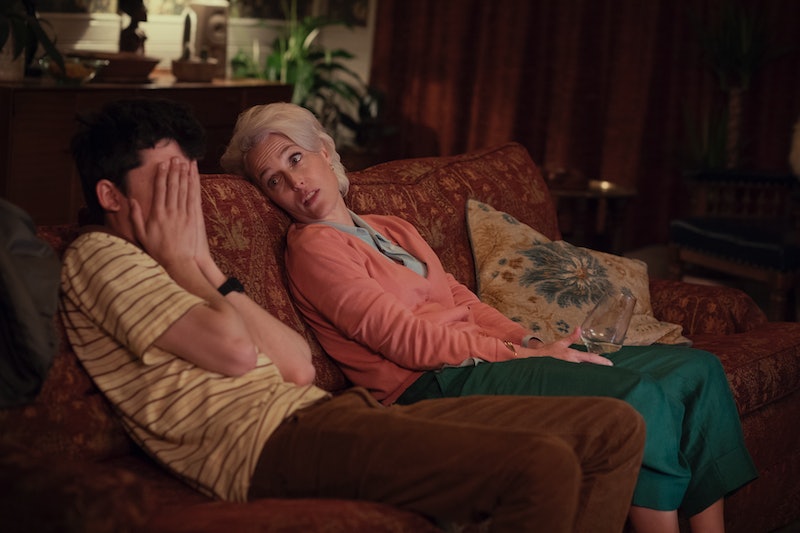 Somewhere, in a far-off land, teenagers embrace their awkward, budding sexualities, share sex-positive conversations, and aren't afraid of condoms or lube. Netflix's Sex Education transports viewers to that world and it's actually not all that far away. In fact, Sex Education was filmed in southeast Wales, per The Charlotte Observer, but the hilly village where it's set is never given a name. And according to Asa Butterfield, who plays main character Otis, that anonymity was intentional.

"It is this kind of Nowheresville," Butterfield told The Observer. "We don't say where it is and it's got these rolling hills and these people dress a bit like they're from the '80s. It has kind of got a timeless vibe to it which I think really helped make the show stand out." According to Wales Online, the show shot at a former university and around Newport in south Wales.

Butterfield's character Otis is a teenage boy whose mother (Gillian Anderson) is a sex therapist. So she's not shy when it comes to having "the talk" or anything related to sexuality and relationships. Knowing that not everyone has the cringeworthy advantage of having a sex guru for a mom, he and his friends ultimately decide to put his life's worth of knowledge to good use by opening a sex therapy clinic at his high school. Before he knows it, he's fielding concerns from peers about out-of-control pubes, "wanking" addictions, and everything in between.

Moordale High appears just as mysterious and wistful as its cushy green backdrop. The building itself feels like something out of a children's book — it sits on a hill, with a grand staircase leading to its entrance, and a crisply hedged courtyard decorates the front lawn. Nothing like what most people picture modern high schools to be.

That alone offers a nice, and intentional, contrast to the show's super contemporary storyline. After all, Otis' sex ed sessions after class represents what people wish sex education was like, so in that respect, its scenery matches its utopian feel. But it's worth noting that the whole show isn't just a fairy tale. It definitely offers substance where it's lacking in other shows of its kind.

Sex Education is different from the usually illustrated American high school adventure for many reasons. For one, it's British, and it's kind of a satirical, yet a more realistic interpretation of the stereotypical Mean Girls version of health class. As it turns out, if you have sex, you won't always get pregnant, and you most certainly will not always die.

In the interview with The Observer, Anderson appropriately called it "a contemporary British love letter to American high school films." It's definitely that, with its cafeteria social ladder, unrequited crushes, and kids who are confused as hell. And like many American high school TV shows and movies, it really could happen anywhere.

More like this
'The Sandman’s Ending Is A Departure From Neil Gaiman’s Comic Book Series
By Kadin Burnett
Everything To Know About The Sandman Season 2
By Kadin Burnett
'Paper Girls' Season 2 Could Introduce Even More New Characters & Threats
By Brad Witter
What’s New On Netflix: 'Never Have I Ever' & 'Indian Matchmaking' Return
By Arya Roshanian
Get Even More From Bustle — Sign Up For The Newsletter