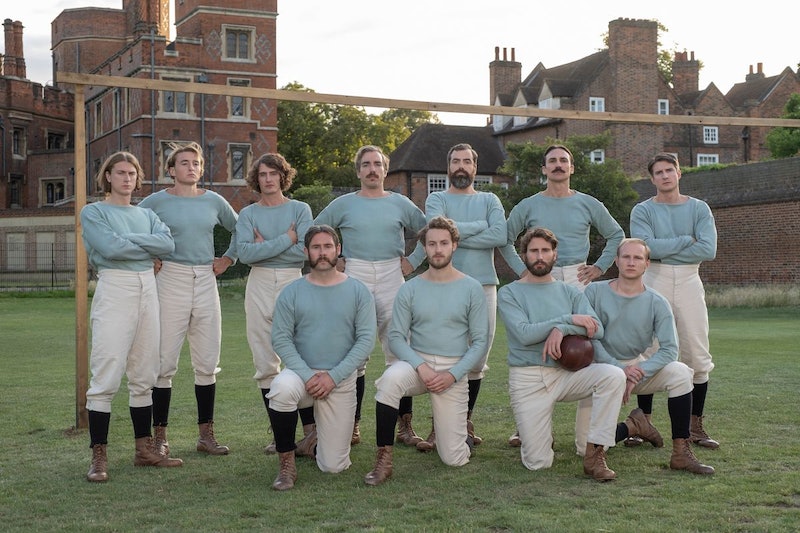 Whenever a UK-made period drama hits our screens there are two questions — where have you scene those British actors before and where exactly in the UK was this filmed? Alongside the actors and costumes, the carefully-chosen filming locations are the unspoken third element which brings it all together. So where was The English Game filmed?

Shooting for the show took place in multiple locations in the North of England. According to the Yorkshire Post, the UNESCO World Heritage Site of Saltaire was transformed into the show's main setting — the Lancashire mill town of Darwen. However, Darwen FC's football grounds, were actually based in an entirely different place. The Manchester Evening Post reports that Bolton's amateur club Stoneclough FC's playing field was converted for use in filming, being transformed to look like a stadium from the 1800s.

As well as Saltaire, Bradford also provided ideal street scapes which fit the image of bustling 1870s England. According to the Yorkshire Post Bradford's historical merchants' district, Little Germany, appears on the show as does City Hall.

West Yorkshire's historical Keighley Station which is on the Keighley and Worth Valley Railway heritage line also appears on the show, per the Yorkshire Post. Keighley Station, according to its website, has several steam locomotives and carriages to operate a tourist service and is a serious hit with visitors to the area.

The English Game is all about the origins of football and the often forgotten class divide in the sport's early days, according to the. The Old Etonians, as the name might suggest, were former students of the notoriously posh and exclusive Eton. Football began as a a game played by the upper classes but the working classes got involved with the sport when Northern factories and mills decided to set up teams of workers in order to boost morale. The upper classes were seen as having an unfair advantage as they had more leisure time but, once playing the game became a profession, working class men were able to afford to play football. The subsequent levelling of the playing field helped kick off what is now the world's most popular sport.

More like this
'The Catch' Revisits A Famed Irish Filming Spot From 'The Tudors'
By Darshita Goyal
'Boiling Point's TV Sequel Is Set To Deliver A “Rollercoaster Of Emotions”
By Catharina Cheung and Sophie McEvoy
Rupert Grint Just Shared A *Major* Update About Ron Weasley’s Future
By El Hunt
6 'Happy Valley' Easter Eggs You May Have Missed
By Sophie McEvoy
Get The Very Best Of Bustle/UK
Sign up for Bustle UK's twice-weekly newsletter, featuring the latest must-watch TV, moving personal stories, and expert advice on the hottest viral buys.