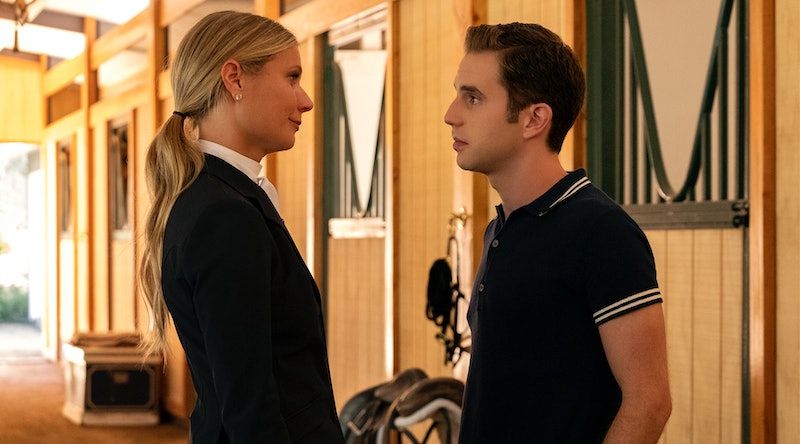 A show as sumptuous as The Politician needs the right filming locations to bring its heightened world to life, and according to Atlas of Wonders, it found them in southern California. The Netflix series is set in Santa Barbara, but traveled over 100 miles down the coast to create Saint Sebastian High School, the center of much of the action during Payton's campaign for student body president. Per the Tribe Tribune, The Politician filmed many of its Saint Sebastian scenes at Orange County's Fullerton Union High School, which underwent a $22,000 makeover in order to prepare it for the show. That included decorating the grounds with flowers and small trees, as well as a deep outdoor cleaning, all of which took place in 2018 in preparation for the intensive two-week filming process.

"Their grounds guys came in and were able to contribute a lot to our campus to make it beautiful to give it a different level of appeal that we previously had," FUHS assistant principal Tina Wilde told the Tribune. “I think that there will be other people who will reach out to us. Not to say that we will do it or commit to it, but I definitely think it puts us through. It gives them a different perspective of our school."

According to Atlas of Wonders, additional schools used in scenes set at Saint Sebastian include Marymount High School on Los Angeles' Sunset Boulevard and Santa Barbara High School, though it's unclear if any scenes with the cast were shot at these two locations or if they were used mostly for principal photography. Corridors, a courtyard, the lunchroom, and the chapel were filmed at Marymount — which happens to be the school Kim Kardashian attended as a teenager — while aerial shots of the chapel were filmed at Santa Barbara's Our Lady of Sorrows Church.

As for the many mansions featured throughout the season, Atlas of Wonders reports that the Paramount Estate in Los Angeles' Silver Lake neighborhood served as the location for Payton's girlfriend Alice's (Julia Schlaepfer) house. Astrid Sloan's (Lucy Boynton) sprawling estate, meanwhile, is a five bedroom, six bathroom house in the Greater Wilshire—Hancock Park area of L.A. This was confirmed by Backstage, which reported The Politician was filming there in August 2018.

Per IMDb, parts of the fourth episode (in which Astrid and Ricardo run away) and the Season 1 finale (where it's revealed Payton wound up at NYU) were filmed in New York. It's likely that the scenes set at popular piano bar Marie's Crisis in Greenwich Village, where Payton sings a cover of Billy Joel's "Vienna," were filmed on location, albeit in a spruced up version of the venue.

As star Ben Platt told The Hollywood Reporter, The Politician will be spending even more time in New York in Season 2, which makes sense given Payton's announcement that he's planning to run for New York State Senate. However, it's possible that at least a few scenes will be filmed in California, since many of the characters introduced in Season 1 (namely, the teens' parents) still live there. In any case, production for the next season will get underway in New York in mid-October, so fans will definitely have some new sights to take in when the new season launches in summer 2020.

More like this
This Bristol Street Went Back To The ‘90s For 'The Lazarus Project'
By Rachel Mantock
Every Song In The Umbrella Academy Season 3
By Kadin Burnett
Does Umbrella Academy Season 3 Have A Post-Credits Scene? The Answer Will Surprise Fans
By Brad Witter
An 'Emily In Paris' Fave Is Joining Season 5 Of 'The Crown'
By Bustle Editors
Get Even More From Bustle — Sign Up For The Newsletter