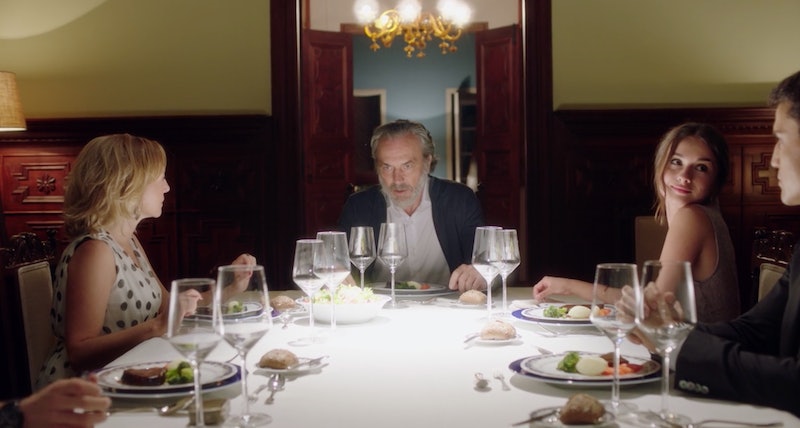 Thanks to Netflix consistently dropping quality content, I'm starting to get a serious case of wanderlust. So much so that, even if a series is pretty dark and twisted, I can't help but get caught up in the filming locations. Like Ozark may be about the criminal underground of middle America, but damn is it beautiful. The same goes for a Spanish series Netflix recently acquired, which seems to have been shot entirely on location. So, where was Unauthorized Living filmed?

However, this beautiful area of northwestern Spain is also well-known for its links to drug trafficking. According to Spanish news site El País, the United Nations Office on Drug and Crime reported that more 1,000 tons of cocaine were seized in Spain in 2016, and ports along the Galicia coast were a "gateway" for the drug.

In November 2018, Vice published a story about Galicia and its links to the drug trade. Due to its origins as an "underdeveloped region" and an absence of governmental support, it was up to the people of Galicia to sustain themselves, Vice reports. This would eventually lead to smuggling — first tobacco in the '50s and '60s, then cocaine in the '80s. In basic terms, "the clans generated wealth [and] they created much-needed employment." So the movement of cocaine from South America to Galicia — a base from which the drug would then be distributed throughout Europe — essentially developed the region into what it is today.

And that's where Unauthorized Living comes in. Based on an idea by author Manuel Rivas, the series follows the fictional Nemo Bandeira (played by Jose Coronado), one of Galicia's most notorious cartel leaders who covers up his bad deeds by keeping up the guise of a successful businessman. While this may sound like just another Narcos-esque series, that couldn't be further from the truth. Unauthorized Living takes a completely unexpected turn when Banderia is diagnosed with Alzheimers and must make the crucial decision of who will be his successor of the cartel.

However, it should be stated that Galicia is not only known for drug trafficking. Far from it, in fact. According to Lonely Planet, Galicia is also known as the "land of witches", and has "strong Celtic connections, wild beaches and arguably the best seafood in Europe." The area is surrounded by beaches that meet the Cantabrian Sea and the Atlantic Ocean, and it's home to two World Heritage Sites in the form of the Tower of Hercules and the city walls of Lugo. The region is also covered with luscious green forests and national parks, including the Isla Atlánticas National Park. The best thing of all? It only takes approximately two hours to fly to the region's capital (Santiago de Compostela) from Heathrow or Stansted, according to one of the region's tourist sites.

Just watching the trailer for Unauthorized Living alone will make you fall in love with the landscapes of Galicia.