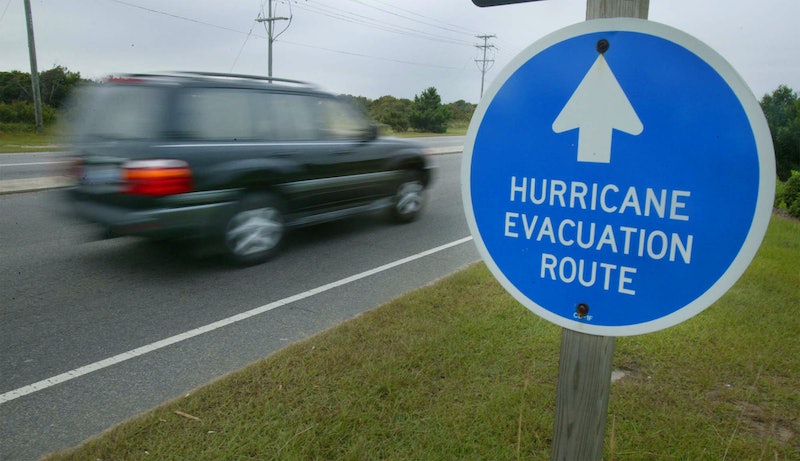 A hurricane is currently making its way through the Caribbean region, prompting concern from those who may be in its path. If you're not sure exactly where Hurricane Dorian will hit, the storm has already struck some Caribbean islands — and it's looking increasingly likely that it'll make landfall on the southeastern coast of the United States, too. As forecasters described, by the time the hurricane reaches the U.S. mainland, it's expected to be a powerful Category 3 storm.

In an Aug. 28 update on the storm, the National Hurricane Center indicated that Dorian is currently over the Caribbean island of St. Thomas, which is part of the U.S. Virgin Islands. As CBS noted, Dorian made landfall in the Virgin Islands as a Category 1 storm, and brought a substantial amount of rain and wind with it. The storm is then expected to continue to make its way toward the United States, passing near or over several other islands in the process, the Weather Channel said.

In that same update, the National Hurricane Center reported that Vieques and Culebra, the U.S. Virgin Islands, and the British Virgin Islands are all currently under a hurricane warning, while the rest of Puerto Rico has a hurricane watch and tropical storm warning in place. Notably, as the New York Times reported, Puerto Rico's main island, which endured extensive damage from hurricanes Maria and Irma in 2017, will likely not experience a direct hit from Dorian. However, the paper added, the storm may strike the Puerto Rican municipalities of Vieques and Culebra and bring heavy rain to the main island.

The storm is then expected to gain strength as it travels toward the U.S. mainland, where the southeastern coast will likely face a direct hit. "All indications are that by this Labor Day weekend, a powerful hurricane will be near the Florida or southeastern coast of the United States," the National Hurricane Center said, per Orlando Weekly. As NPR reported, current models predict that Dorian will strike Florida on Monday morning, and that the state could start experiencing tropical-storm-level winds on Saturday evening.

Of course, as the Weather Channel noted, it's still hard to predict exactly where Dorian will strike the U.S. mainland at this point, because its path ultimately depends on how it moves and turns as it approaches the southeastern part of the country. That's why it's important for people throughout the east coast of Florida, as well as in other states, to be prepared for the storm.

"@NHC_Atlantic is forecasting that #Dorian could be a major Hurricane ... ," Florida Governor Ron DeSantis tweeted on Aug. 28. "All Floridians on the East Coast should have 7 days of supplies, prepare their homes & follow the track closely." Moreover, as CNN reported, officials in Georgia and the Carolinas are also preparing for the possibility that Dorian could affect them.

As you can see, no one can be certain just how much Dorian will affect those residing in its path. If you live in an area near the storm's trajectory, though, be sure to take the precautions advised by your local officials.