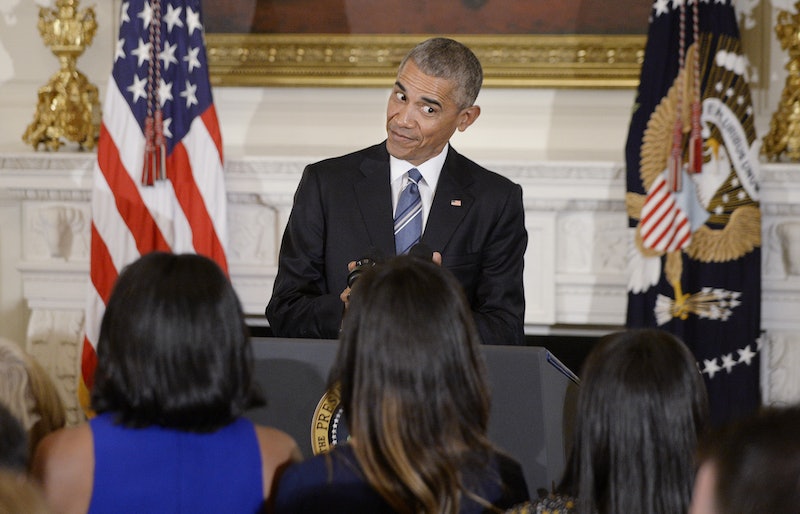 President Obama has one last executive order for the First Family: a vacation. The order's probably not legally binding, but for once, he probably won't get any pushback. After a tough year of a controversial presidential campaign, coupled with devastating election results, even the country's commander-in-chief needs a break. Where will Obama go post-inauguration? Far from Washington, D.C., that's for sure. As soon as Trump takes control of the White House, nuclear codes, and Air Force One, the Obamas are going on vacation on the other side of the country.

TMZ reported Monday that the Obamas will be headed to Palm Springs for some R&R following the inauguration. When they leave the capital after the ceremony, they will be brought by helicopter directly to Andrews Air Force Base in Maryland. From there, they'll take a plane to California. TMZ even knows at what exact time they'll take off, 2:45 p.m. ET, on "Special Air Mission 29,000."

From then on, they're on their own. The government-funded travel will be over for the Obamas, and they'll have to find their own way back to the D.C. area, where they plan to live for at least the next two years while Sasha Obama is finishing high school. Reports point to the Obamas moving into quite a nice home in the Kalorama neighborhood of D.C. It was last sold for more than $5 million and the rent is estimated to be as much as $22,000 per month.

Moving vans were spotted in the area on Monday, reported WUSA, D.C.'s CBS affiliate, so after vacation, they may be completely ready to move in. Just around the corner will be Trump moving vans too, as Ivanka Trump and Jared Kushner's clan bought a home just minutes away from the Obamas' new digs. They may well share a security area, and if the Trumps have dogs, there's a good chance they will run into each other while out for walks.

Even with the neighbors, it seems that the family is ready to leave the White House. "I mean, the girls, obviously, you know, they are now of an age in which the constraints of Secret Service and bubbles and all that stuff has gotten pretty old," Obama told 60 Minutes on Sunday. "Michelle never fully took to the scrutiny. I mean, she’s thrived as a first lady, but it’s not her preference."

If they're looking for some privacy, they should get it from the moment they step on that chopper.

More like this
What We Know About Where Caroline Watt Is Now
By Catharina Cheung
25 Things I've Reduced My Life To, In Addition To WFH In My PJs
By Ginny Hogan
7 Things We Learned From Rebekah Vardy's First Post-WAGatha Christie Interview
By Sam Ramsden
Dr. Anna Pou Is Still Practicing Medicine After Facing Murder Charges
By Brad Witter
Get Even More From Bustle — Sign Up For The Newsletter