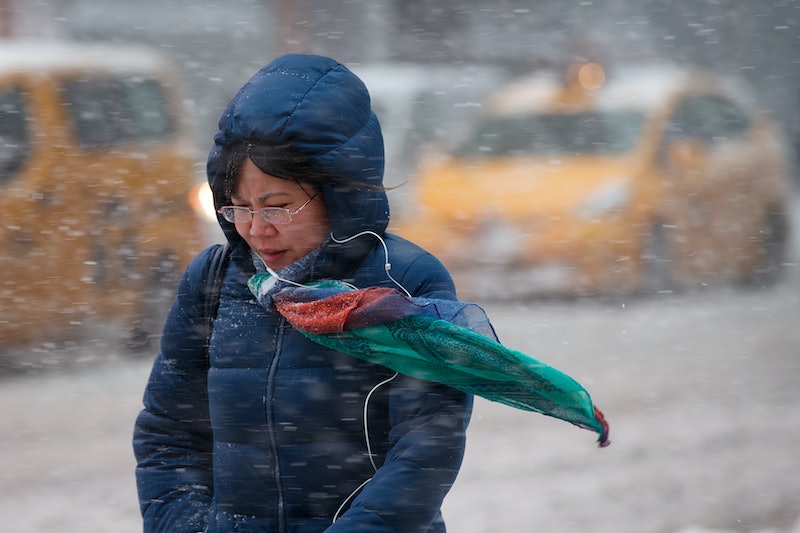 As the East Coast prepares for a harsh winter storm, meteorologists expect most of the region to experience strong winds, ice, and snow. Anyone in the eastern United States should prepare for a few days of freezing temperatures and dangerous travel conditions. But since every area will see slightly different weather for the remainder of the week, it's important to know where exactly the "bomb cyclone" will hit.

Winter Storm Grayson will affect the entire East Coast, with areas from northern Florida up to Maine receiving winter storm warnings. As the storm makes its way north, a rapid drop in atmospheric pressure will create a "bomb cyclone." The southeast U.S. will miss the most extreme effects of the storm, as the "bomb cyclone" is expected to hit New England Wednesday night.

"Low pressure in the western Atlantic Ocean will intensify and track toward the north-northeast off the Northeast coast late Wednesday through Thursday, before plowing into Atlantic Canada by early Friday," The Weather Channel reports.

Most larger cities will avoid the worst of the "bomb cyclone," but Boston is under a winter storm watch for heavy snowfall. Maine, southern New Hampshire, and eastern Long Island could also experience blizzard conditions.

Northern Florida and southern Georgia, the Carolinas, and the immediate New England coast could also experience power outages this week.

As for other East Coast cities, The Washington Post's Jason Samenow reports:

Philadelphia and New York have a better chance for a coating of snow, but — unless the storm edges closer to the coast — the more significant snow should remain to their east from Atlantic City to eastern Long Island, where at least four to six inches could fall late Wednesday to late Thursday.

While snow flurries and ice will blast southeastern states not used to winter storms, the Mid-Atlantic and Northeast could experience record low temperatures on Friday and Saturday as Winter Storm Grayson pulls in freezing air from the North Pole and Greenland. Making matters worse, high winds will make the air feel even colder.

High winds up the coast mean the storm will resemble a winter hurricane. The Weather Channel explains:

Increasing winds are likely along much of the Northeast coast. Wind gusts stronger than 50 mph are possible along the immediate coasts of North Carolina (Thu AM), New England (Thu PM) and Atlantic Canada (late Thu PM into early Fri AM) depending on the exact track of the low-pressure system. Wind gusts 60-70 mph are possible on Cape Cod and for the Massachusetts islands. Power outages are likely.

"The cold wind chills will cause frostbite in as little as 30 minutes to exposed skin," the National Weather Service's advisory warned. "Expect wind chills to range from 10 above zero to 10 below zero."

The storm has already affected travel by closing a portion of Interstate 10 in north Florida Wednesday morning, and ice began forming in southern Georgia. Officials warned drivers to be safe on the roads, or avoid them altogether. As weather conditions worsen Wednesday and into Thursday, it's best to keep your driving to minimum and stay bundled up inside instead.