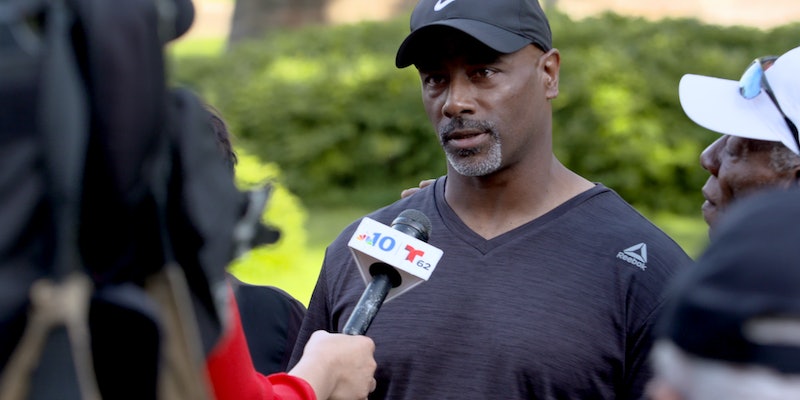 Netflix's new docuseries, The Innocence Files, chronicles Chester Hollman III's battle to get released from prison after being convicted for a 1991 murder he did not commit. He served almost 28 years before his case was finally overturned in July 2019; prosecutors acknowledged that they had evidence pointing to other suspects, and both eyewitnesses who placed Hollman at the scene recanted their testimonies, alleging they felt pressured by police to name him. (Per the Philadelphia Inquirer, the detective on the case denied having coerced the witnesses). "I apologize because [Hollman] was failed, and in failing him, we failed the victim, and we failed the community of the city of Philadelphia," Assistant District Attorney Patricia Cummings said, per another Inquirer article. "We believe it was near-impossible Chester Hollman was the perpetrator of the crime."

Following his release, Hollman went to live with his dad in Wilmington, Delaware, his lawyer, Alan Tauber, told ABC News. "He's been slowly but surely acclimating with the fact that he's free," Tauber said. "[He's getting] a grip on the fact that he doesn't have to get permission to go up to the second floor of his house."

While speaking with the Inquirer shortly after his release, Hollman struggled to answer questions about what he would do next. "I feel like I'm crushed inside," he said. "I don't feel like I'm really me. It took every ounce of strength to make it to this point." He wasn't used to sleeping in his own room on a soft mattress, sitting in the open air, or even simple things like mowing the lawn, and said he worried about "not wanting to fail the people who got me out and the people I left in there." Tauber told ABC that his client's priorities were getting a driver's license, health insurance, and counseling before thinking about his long-term future.

However, Hollman said in The Innocence Files that he was committed to making something of his second chance at life, and a few months after his release, he gave a speech about his struggle at the Peace and Justice Ministry of St. Vincent de Paul.

Beyond that, The Inquirer reported that Hollman has adopted a dog, and a GoFundMe set up for him raised a little over $12,000. It's possible he'll choose to seek damages from the city or state for his wrongful conviction, but for now, Hollman just seems focused on adjusting to his newfound freedom.

More like this
Anthony Templet Wants To “Live Normally” After Killing His Father
By Brad Witter
Where Is Charlie Evens Now?
By Morgan Leigh Davies
Here’s Where Kirra Hughes Is Now
By Morgan Leigh Davies
‘Squid Game’ Creator Hwang Dong-Hyuk Just Dropped A Major Season 2 Tease
By Brian Anthony Hernandez and Bustle Editors
Get Even More From Bustle — Sign Up For The Newsletter