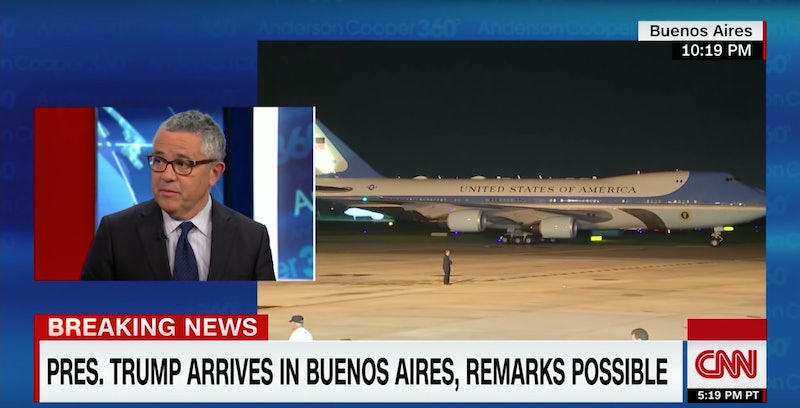 CNN chief legal analyst Jeffrey Toobin has changed his mind about whether Trump will finish his first term as president. To Anderson Cooper on Thursday night, Toobin admitted that that day had marked the first time he had started to actually believe Trump might be out of the White House by 2020. And the reason why his perspective changed came down to one simple argument: Toobin thinks Trump's responses to the increasing number of links between his organization and Russia have become flat out "preposterous."

Toobin was explicitly addressing the series of recent reports that have come out with new details about the Trump campaign's involvement with Russia. "I mean, I think this thing is enormous," he said.

He then went on to list the series of "preposterous" defenses being laid out by Trump and his team. These defenses included the claim by POTUS that he had no idea about the business deals that Cohen negotiated between the Trump Organization and Russia for over six months. It also included the claim that Donald Trump Jr. never spoke with his father about his Trump Tower meeting with Russians where he expected to get "dirt" on Hillary Clinton.

All of these [stories] are complementary to each other, and all of the stories that Trump is telling about them are preposterous. And when you combine them all, the question becomes: When do Republicans start to turn on Trump?

Toobin concluded that "that's the only thing that's going to get Trump out of office," adding, "It's not going to be Democrats. And it's certainly not now, but there may be a point where it's too much."

Then, Democratic strategist Paul Begala weighed on, saying that he wasn't "there yet" in believing it was possible Trump wouldn't finish out his presidential term. His reasoning for this was a direct response to Toobin's point about Republicans needing to turn on Trump: In order to avoid impeachment, Trump only needs the support of 34 Republican Senators (there are currently 51).

He added, "I do worry, honestly, for our country that the president, this president, is too distracted, is too obsessed." Begala said he worried that Trump is "having a presidential panic attack" over the Russia investigation.

It's true that Trump has been aggressive in his recent defenses against the Mueller probe and Cohen guilty plea. On Thursday night, Trump tweeted that the Mueller probe is "an illegal hoax that should be ended immediately." He added, "Mueller refuses to look at the real crimes on the other side. Where is the IG REPORT?"

Trump will be at the G20 summit Friday and Saturday, in Buenos Aires, Argentina. He was originally scheduled to meet with Putin over the Ukraine crisis, but that meeting was abruptly canceled two days prior to the date it was supposed to occur. Trump canceled the meeting less than an hour after he'd told reporters he thought it was "a very good time to have a meeting [with Putin]."

Trump's meeting with Putin, scheduled for two hours, would've been the longest one he had with any world leader for the weekend. Putin has not made any public comments about the change of plans.