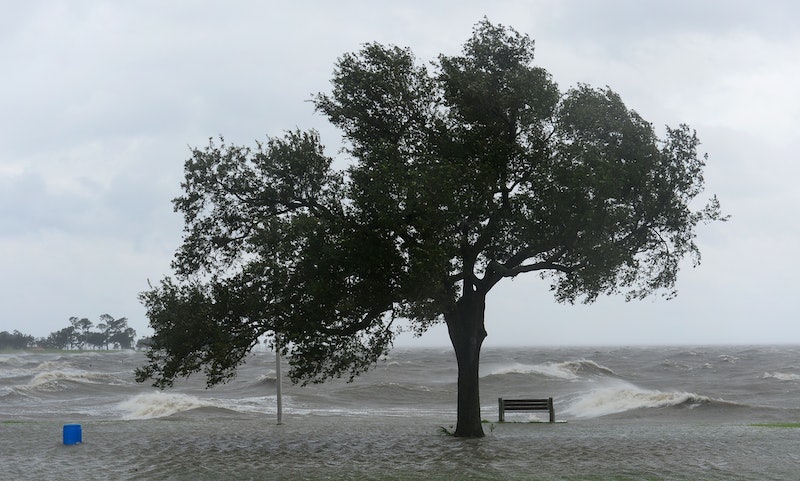 The Eastern coast of Texas is bracing for impact, as Tropical Storm Harvey is expected to hit several coastal cities. Meteorologists predict it will make landfall on Friday, by which time they expect it will be upgraded to a Category 3 hurricane, a classification that includes winds of 111 to 129 miles per hour and "devastating damage," according to the National Hurricane Center. By Thursday morning, winds in the tropical storm have been reported at 60 miles per hour, and gaining speed.

Cities along the Texas coastline are being treated as especially dangerous. Texas Gov. Greg Abbott has declared a state of emergency for 30 counties in the southeastern part of the state, and cities like Corpus Christi, Port Mansfield, and Port O'Connor getting hammered especially hard by the full force of the hurricane. Other parts of the coast — farther north in Galveston, and farther south down to Brownsville, are expected to be hit by a weaker version of the storm, and have a tropical storm warning, not a hurricane warning.

Some areas farther inland are also expected to be hit by a weaker version of the storm, Houston is expecting 10 to 15 inches of rainfall, and even Austin, near the center of the enormous state, could see heavy rain and winds. The storm is moving slowly, so it is expected to dump large amounts of rain on the areas where it hits.

The worst hit areas along the coast are expecting major flooding as the storm reaches land. Padre Island, a barrier island along the coast, is expecting 6 to 10 feet of flooding from the rain, according to the National Hurricane Center.

Those in the path of the storm are preparing for the worst: residents are buying supplies, universities and beaches are shutting down, airlines are giving customers waivers, and localities are providing residents with sandbags. Oil companies with offshore rigs in the Gulf of Mexico have already evacuated much of their personnel in the region.

Some are concerned that the federal government may not be fully prepared for the storm, with President Trump still relatively early in his term, dealing with a chaotic White House, and much of the executive branch still understaffed.

Trump's director of the Federal Emergency Response Agency, William B. "Brock" Long, was confirmed on June 20, but both of the deputy director positions at the agency currently have nominations awaiting confirmation.

In addition, the Department of Homeland Security, which includes FEMA under its purview, has no secretary after the previously confirmed head, Gen. John Kelly, left the department to become White House Chief of Staff; the president has not announced a replacement.