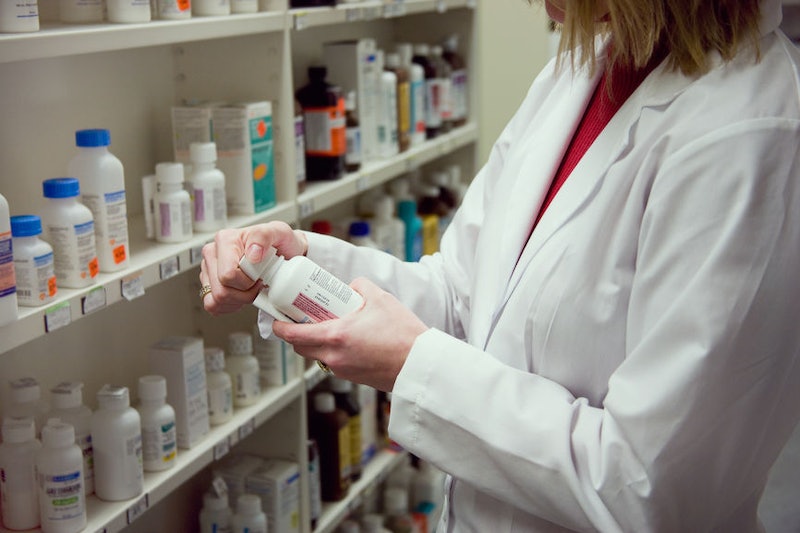 As the Brexit deadline looms, the exact terms of the UK's departure from the European Union remain alarmingly unclear — and if the chaos in parliament is anything to go by, a resolution isn't likely any time soon. While you probably don't need another reason to worry about Brexit, there is an issue you might not have considered: your access to medication. Pharmaceutical industry leaders have warned that British people who take prescription drugs might have cause for concern — so which medicines will be affected by Brexit, and how can you prepare?

As the BBC reports, a vast proportion of prescription medications could be harder to access in the event of a no-deal Brexit. 37 million packs of medicine are currently imported from the EU every month, and if a deal isn't reached to safeguard the movement of goods across the EU into the UK, that supply could be disrupted. Firms have already been instructed by the government to stockpile a six-week reserve of medication.

Martin Sawer, executive director of the Healthcare Distributors Association, told the government's Health and Social Care Committee, "We need politicians to understand there could be consequences. We are not suggesting anybody needs to stockpile outside of the supply chain yet," adding, "But come January that might be a different picture."

"We are, we believe, going to be in a difficult situation if there is not a deal by Christmas," Sawer told MPs in October — which isn't exactly reassuring to read in December, with no deal in place.

Ash Soni, president of the Royal Pharmaceutical Society, warned of potential "delays at ports, increased costs, and legal or regulatory differences," after Brexit. Writing in the Guardian, Soni noted that delayed movement could force medications with a short shelf life, or those which require particular storage conditions, to be destroyed, resulting in delays or shortages of medication. According to the BBC, insulin and certain vaccines require consistent refrigeration, while some cancer medications have a particularly short shelf life.

It's not just existing medications that could be affected after Britain leaves the EU, as the Financial Times reports. The Medicines & Healthcare products Regulatory Agency (MHRA), Britain's drugs regulator, said that in the event of a no-deal Brexit, new medications might be harder to access. Currently, drugs approved by the European Medicines Agency (EMA) can be sold in the UK; without a Brexit deal, however, Brits would only have access to medications also assessed by the MHRA. And some manufacturers might not bother applying for this assessment, the MHRA warned, meaning their newest medications might not be accessible in the UK at all.

After the Brexit referendum, the EMA announced it will relocate from London to Amsterdam by March 30, 2019. And as the Guardian reports, the agency has already cut contracts with British pharmaceutical companies, which is a significant blow for the MHRA. "The MHRA has benefited enormously from its close links with the EMA," Martin McKee, a professor of European health at the London School of Hygiene and Tropical Medicine, told the Guardian. "The fracturing of those links will impact severely on its budget, much now from the EMA, and its ability to attract and retain skilled staff."

The current uncertainty surrounding Brexit creates a frightening environment for prescription medication users, who might be adversely affected if the supply of their drugs is disrupted. Ash Soni warns, however, that you shouldn't attempt to create your own medication stockpile: drugs may expire, while your excess stock can't be given to another patient should your prescription change. The only option, it seems — as is the case for many nervously awaiting a Brexit resolution — is to wait.