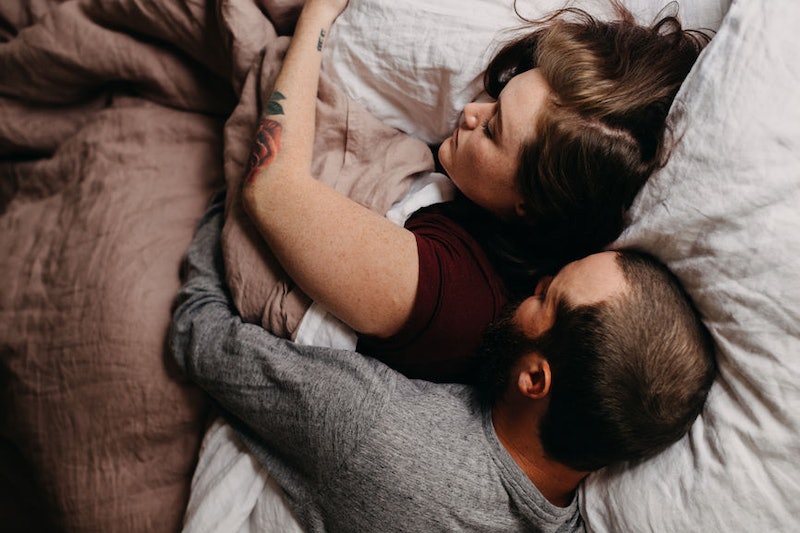 In any relationship there is a degree of habit and routine that dictates the course of our daily lives — perhaps your partner is always first in the shower, but you’re the one who makes the coffee — and part of this is which side of the bed each you sleep on. In my experience this has always come about by way of an unspoken mutual agreement of which side just feels better. Of course there are other more practical considerations such as the earliest riser being closer to the door, or the one with the sharpest hearing being farthest from the window, but ultimately this decision may have more significance and a greater impact on your life than you originally thought. Looking at the facts and speaking to the experts, I've realised there could be such a thing as waking up on the wrong side of the bed.

According to a study of 3,000 adults conducted by Premier Inn, those who sleep on the left side of the bed wake up happier and better equipped for dealing with the stresses and pressures of daily life, whereas those sleeping on the right are likely to be grumpier and have a far more negative outlook. The research stated that "over a quarter of people who snooze on the left side of the bed feel they have a really positive outlook on life in general, compared to 18 percent of right-side sleepers."

And the evidence suggests that all that positive energy leads to an increase in confidence and a greater enjoyment in the workplace, with left-hand-side sleepers — or "lefties" — being more likely to be in a position of permanent employment; plus two-thirds purport to be better than their partner in a crisis. The study confirmed that "31 percent of 'lefties' love their job compared with just 18 percent of ‘righties’ — with a staggering 1 in 10 admitting to hate their job." Interestingly, a further study by Spatone and reported in The Sun, found that "righties" don't start to see their morning mood lift until 9:22 a.m., whereas "lefties" start to see their mood increase at 9:07 a.m.

A similar study of 1,000 adults by bed and mattress manufacturer Sealy UK backed up the findings, reporting that lefties are 8 percent more likely to love their job, and to have a lot of good friends. Righties, meanwhile, are more likely to enjoy their own company — and while it might seem all like doom and gloom for them, Premier Inn found that on the whole those who prefer the right side tend to earn more than their partners. That's some consolation at least.

The study goes some way to explaining why we are so protective over "our" side of the bed — 75 percent of us are reportedly committed either to the left or the right, and are reluctant to change, according to Premier Inn. But Sealy's sleep expert Neil Robinson believes couples shouldn't get too hung up on sides, and should focus instead on getting a full 8 hours, stating: "Waking up in a good mood each morning is less about which side you sleep on, and more about getting 7.5 - 8 hours’ sleep each a night on a supportive, comfortable bed." So there you have it.