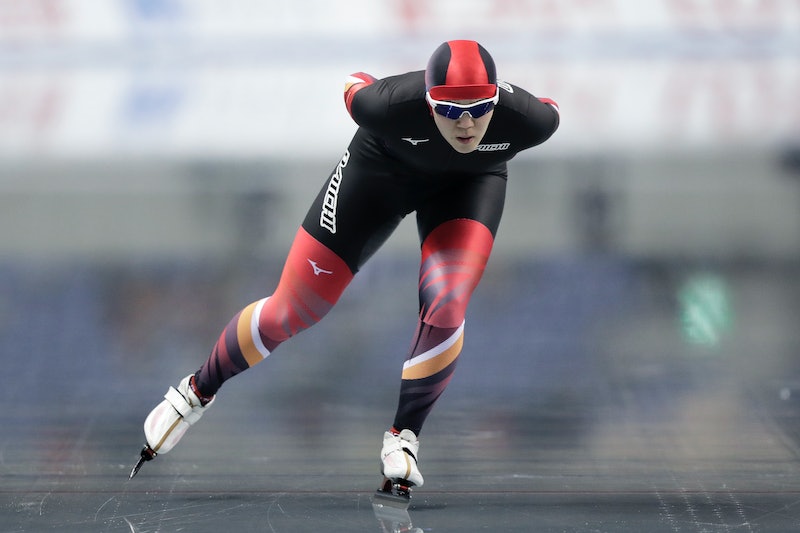 Athletes and world leaders alike began gearing up for the start of the winter Olympics in PyeongChang, South Korea months and months ahead of time. But the anticipation was building heavily among spectators as well. The kick-off for the Olympic Games starts with the Opening Ceremony, held this year on Feb. 9, but you won't have to wait until then to start enjoying them because some sports start before the 2018 Winter Olympics Opening Ceremony officially begins.

Both mixed doubles curling and men's individual ski jumping qualifications commence on Feb. 8, even before the symbolic pigeons are released and the Olympic Cauldron is lit with the official flame, which will continue to burn for the entire two weeks of the games. Men's singles figure skating and women's freestyle skiing begin on the same day as the opening ceremony, culminating on Feb. 25 with the closing ceremony.

In the past, sports started before the ceremony in order to accommodate the figure skating schedule, ensuring that the biggest night of skating took place on a busy night for television and was not buried on a Saturday. Additionally, events were moved up before the Opening Ceremony in order to give competitors enough time to rest in between them.

The Winter Olympics are being held for the first time ever in a South Korean city and the first time in Asia in 20 years. PyeongChang beat out Munich, Germany and Annecy, France to be the host of the games back when the location was decided in 2011.

Americans will reportedly have a strong showing of snowboarders, including Jamie Anderson who will be defending her gold medal in slope style and skier Lindsey Vonn, who missed the last winter Games due to a knee injury and will be returning to compete in her final Olympics.

To prepare for the games, 12 Olympic venues, six pre-existing and six new, were modified for the events. When it comes to preparing for the opening and closing ceremonies, organizers have already run into financial roadblocks, with early sales of tickets being poor, and concerns that the lack of roof over the Olympic Stadium would drive away spectators due to the freezing winds and temperatures.

The Winter Olympics has courted controversy and headlines in recent months due to the doping, state-sponsored cheating scandal in Russia. Although the International Olympic Committee announced that Russia is officially barred from the games, Russian athletes who fulfill certain criteria are allowed to compete in the Olympics under the category "Olympic Athlete from Russia." Athletes from Russia, 22 in total, appealed for reinstatement after being banned. However, all Russian government officials are not permitted to attend the event and the country's flag and anthem are both banned from the ceremonies and competitions.

In response to North Korea possibly sending a delegation, U.N. ambassador Nikki Haley told Fox News that it was an "open question" whether the U.S. would compete in the games at all. In lieu of the inflammatory rhetoric between North Korean leader Kim Jong-Un and President Trump, as well as North Korea's continued nuclear testing, Haley implied that the U.S. would re-consider its participation if North Korea participated.

White House Press Secretary Sarah Huckabee Sanders later clarified Haley's statements in a tweet though, writing "The U.S. looks forward to participating in the Winter Olympics in South Korea. The protection of Americans is our top priority and we are engaged with the South Koreans and other partner nations to secure the venues."

The U.S. Olympic Committee also clarified that it had not made any decisions to the contrary and would arrive in South Korea as planned. American athletes who had already pledged that they were competing in PyeongChang also chimed in, saying that they didn't feel any security threats.