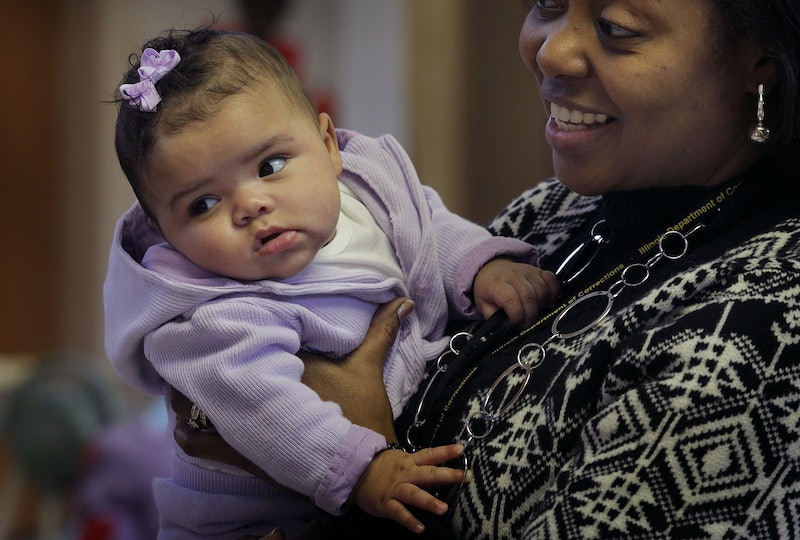 New York-based employees will start the new year with a new benefit: paid family leave. Beginning Jan. 1, the state provides up to eight weeks of paid leave — with full job protection — to anyone who works and needs time off to care for a child or sick relative. It's a resource that fills the gaps left in federal law concerning family and medical leave. But New York isn't the only state to offer those benefits: so which states have paid family leave?

The United States is one of only eight countries that fails to offer paid leave to new moms and dads: The Family and Medical Leave Act, signed in 1993, requires employers across the country to provide employees with up to 12 weeks of unpaid leave, with job protection, for qualifying family or medical purposes. And while the Family and Medical Leave Act provides a vital safety net to some, millions of others can't afford to take unpaid leave. That's why a handful of states have picked up where the federal government has fallen short to pass paid family leave programs of their own.

According to the National Conference of State Legislatures, New York is the fourth state to pass and implement paid family leave. The first was California, which passed its paid family leave law in 2004. The California law ensures eligible employees receive at least 55 percent of their wages for up to six weeks when taking time off to care for a new child or sick relative. According to the New York Times, the law will expand the partial wage rate to up to 70 percent for the state's lowest-paid earners and up to 60 percent for nearly all other employees in the new year.

In 2009, New Jersey became the second state to offer paid family leave, with the passage of a bill ensuring eligible employees receive up to two-thirds of their wages (with a cap of $524 per week) for up to six weeks. Although state legislators approved a bill aimed at expanding the law in 2017, the legislation was vetoed by Republican Gov. Chris Christie in late July.

Five years after New Jersey, Rhode Island became the third state to offer residents paid family leave through its Temporary Caregiver Insurance Program. The program allows any private or public sector employee who opts in to take four weeks of paid leave to care for a sick relative or for the birth, adoption, or fostering of a child. The program also allows for employees to take up to 30 weeks paid leave if needed for their own disability. Employees receive partial wages as determined by their earnings, although benefits are guaranteed to be no less than $72 per week and no more than $752.

Beginning Jan. 1, New York will provide eligible employees up to eight weeks of partially-paid leave. The partial wage rate is set to increase from 50 percent to 55 percent in 2019, followed by 60 percent in 2020, and 67 percent in 2022.

While a paid family leave law was passed in Washington state in 2007, it was never fully implemented at the time it was set to go into effect, according to the National Conference of State Legislatures. The state has since struggled to develop and appropriate the required funding, causing the program to be indefinitely postponed.

But states aren't the only ones moving to enact paid family leave programs. In an effort to pick up where California's state paid family leave law left off, the city of San Francisco enacted a program to fund the wages not covered by the state. And in late 2016, Washington, D.C. passed a bill ensuring eligible employees receive up to eight weeks of paid family leave. That bill is set to go into effect in 2020.

While only a handful of states have actually passed and implemented paid family leave laws, the idea of paid family leave actually appears to be well supported by the American public. According to a 2015 YouGov and Huffington Post poll, 69 percent of Americans think employers should be required to provide paid maternity leave. Perhaps New York's example will encourage more states to adopt their own paid family leave programs in the new year.