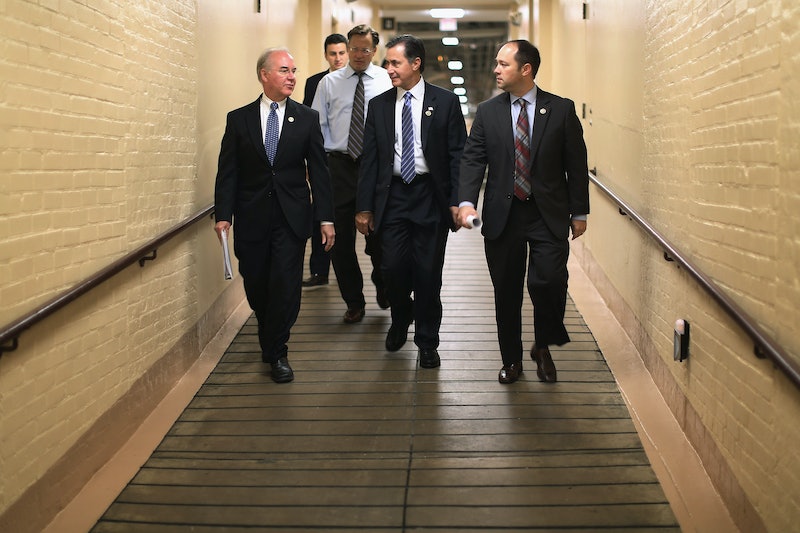 We may be in the midst of the most turbulent start to a presidential administration since seven states seceded between Abraham Lincoln's election and inauguration. Still, it's worth remembering that there is actually a large legislative agenda that President Donald Trump hasn't even started on yet. The biggest piece on that agenda remains his promise to "repeal and replace Obamacare," a cause that the GOP Congress seems especially enthusiastic about.

But that goal became more complicated Monday night. Recently, some Republicans have begun to realize how many pitfalls there are in trying to tear down a program that insures close to 20 million people, and they have begun to switch their rhetoric towards a "repair" of the healthcare law, as Republican Rep. Leonard Lance said.

But it's beginning to look like even agreeing on a modest bill that shrinks or reforms the Affordable Care Act could be running into a brick wall. On Monday night, hardliners in the Republican Congress known as the House Freedom Caucus have announced that they will oppose anything less than full defunding of Obamacare, saying that any repeal bill must be at least as strong as the 2015 bill passed by Congress and vetoed by Obama.

That 2015 bill was later scored by the nonpartisan Congressional Budget Office, which found that passing it or something similar without a robust replacement could lead to 32 million people losing insurance, while increasing premiums on those who still have it and enlarging the federal deficit at the same time.

That so many Republican members of Congress (32 of them — enough to kill a bill if they all voted in lockstep) insist on this timeline makes things extremely difficult for Republican leaders trying to figure out a way to get ACA repeal/replace/repair/whatever-they're-calling-it-now passed. Republicans from states where they have expanded healthcare subsidies have reason to worry about what could happen if thousands of their constituents lose their healthcare. Numerous Republican governors have insisted that their colleagues in Congress don't cut off the federal healthcare spending in their states. And even some of the most conservative GOP senators have said something similar.

"I'm from a state that has an expanded Medicaid population that I am very concerned about," Shelley Moore Capito, a Republican senator from West Virginia told Talking Points Memo shortly after the election. "I don't want to throw them off into the cold, and I don't think that's a strategy that I want to see. It's too many people. That's over 200,000 people in my state."

With 52 Republican senators, just three defections would kill any ACA repeal bill, even using special budget reconciliation techniques immune from a filibuster. So. the GOP Congress seems to be in a dilemma — legislation can't pass the House unless it goes hard on destroying the program, resulting in millions losing insurance, but it probably can't pass the Senate if it takes away healthcare from millions of constituents.

Republicans in Congress are continuing to bump into the problem best illustrated by Philip Klein in the Washington Examiner, who wrote the GOP is having difficulties with their grand Obamacare plans because they are “having a tough time stating a simple truth, which goes something like this: 'We don’t believe that it is the job of the federal government to guarantee that everybody has health insurance.'"

The vast majority of Republican messaging on healthcare has focused on the need to bring down costs and expand access:

It begs the question: does the GOP Congress realize that it's contradicting itself in the same day?