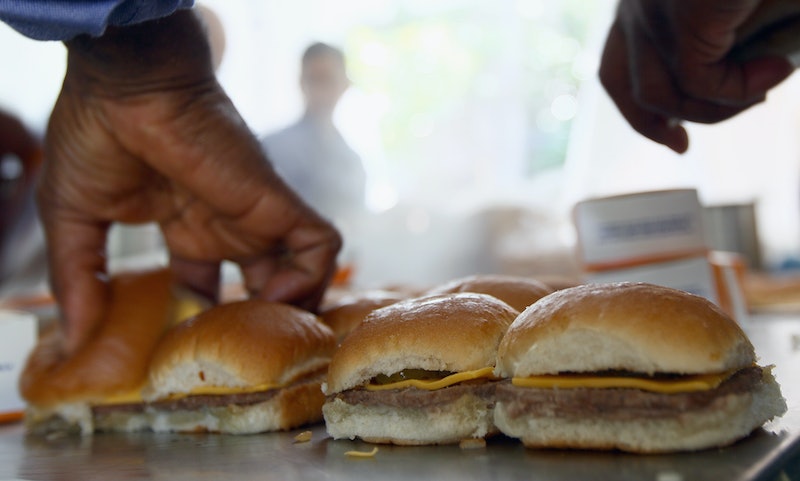 White Castle is known for their all-beef, chicken, and fish sliders — being an affordable paradise for meat-lovers is kind of their thing. But now, that very thing is about to change, because the infamous and curious vegan Impossible Burger has been added to White Castle menu. Yes, that's right, the fast food chain is serving up plant-based sliders that look, taste, and feel like meat. So, yeah, their thing is about to be another thing because they're officially the only mainstream national fast food burger chain that's selling the meat-less burgers, which makes them pretty darn special.

If you're not familiar, the Impossible Burger is a totally vegan burger patty that's made of textured wheat protein, coconut oil, potato protein, and a game-changing special protein found in plants called Heme. Heme, a protein also found in muscles, is what makes the meat-less patties hold together very much like meat; it also makes them cook like meat, and "bleed" like meat. The Impossible Foods company's discovery of the magical wonders of Heme is what has set them apart from all other meat-less burger attempts in the industry. If you've tried the burger, you know there's no comparison to a veggie patty that's typically made with a combination of veggies and beans, oats, or quinoa. And while a lot of people might have heard about Impossible Foods, the company that's raised over $250 million from impressive investors like Bill Gates and Li Ka-Shing, not that many people have actually had a chance to try the burgers — until now, thanks to White Castle.

Despite it's low-key profile, The Impossible Burger is already on the menu at over 1,300 restaurants in the country, most noticeably at places like Umami Burger and Bareburger — sit-down restaurants. This foray into the mainstream fast food market place is definitely a big step for the Impossible Burger which is about to become a lot less of a mysterious future food that only certain diners have access too. Impossible Foods is hoping that with this partnership, meat-lovers who might not have otherwise given a plant-based option a chance, will. After all, sliders are pretty low commitment as far as burgers go. Most people who are ordering at White Castle get at least four sliders, so to give one Impossible slider a shot isn't a big risk.

The hope is, of course, that the Impossible Burger converts a lot of carnivores into herbivores — at least when it comes to fast food burgers. Fun fact: the Impossible Burger uses a 20th of the land, a fourth of the water and and produces only an eighth of the greenhouse gas emission that beef burgers create. And if you eat cheese, you can still still have a omnivore experience as cheese melts pretty perfectly on the Impossible patty. White Castle is serving it on the signature White Castle square bun, with pickles, onions, and smoked cheddar for only $1.99 — making the burger vegetarian-friendly, and only vegan if you hold the cheese.

And while White Castle definitely has a reputation for catering to meat lovers, this isn't the first of their vegetarian efforts too. The veggie sliders (one is made of carrots, string beans, zucchini, peas, broccoli and spinach, while the other is made of black beans, red peppers and corn) have been on their menu since 2015. The veggie slider comes with sweet Thai, ranch, or honey mustard dressing, so that they're just as tasty and flavorful as the other items on the menu. But if you've had a veggie burger and you've had an Impossible Burger, you know there's no comparison. Starting Apr. 12, the plant-based sliders are available all day long at 140 White Castle restaurants sprinkled through New York and New Jersey, and Chicago.