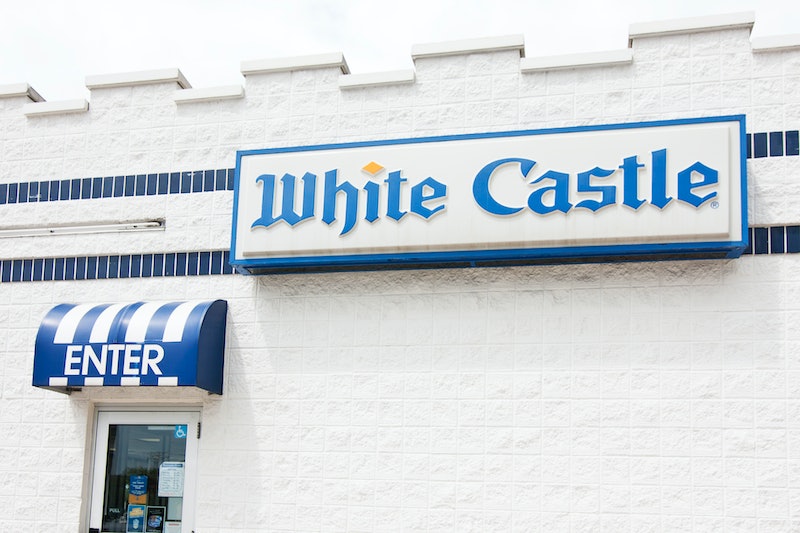 On Dec. 6, the Food and Drug Administration announced that White Castle voluntarily recalled some frozen food products due to possible listeria contamination. According to the company, public health officials haven't reported any illnesses in connection with their products on shelves. Still, White Castle is asking customers to get rid of any potentially contaminated items or return them for a refund.

As the FDA announcement explains, a third-party lab discovered the listeria monocytogenes contamination in frozen sandwiches from a manufacturing facility that handles some of White Castle's products. Since then, no products from that facility have been sent out to stores. In a statement provided to Bustle, White Castle VP Jamie Richardson said:

This voluntary recall is something we initiated because we believe acting with an abundance of caution is the right thing to do when any question of food safety arises. During a production run, our food safety tests revealed a problem. We moved quickly to get rid of the tested product and to initiate a voluntary recall of select production runs that preceded the problem. Of the products recalled, none has tested positive for listeria.

The bacteria leads to listeriosis, a serious infection that affects 1,600 people and kills 260 each year, according to the Centers for Disease Control and Prevention. The infection especially affects pregnant women and their fetuses, older adults, and people with vulnerable immune systems.

The recall included White Castle's frozen 6-pack cheeseburgers, 6-pack hamburgers, 6-pack jalapeno cheeseburgers, 16-pack hamburgers, and 16-pack cheeseburgers. Products with a "best-by" date anywhere between Aug. 4, 2020 and Aug. 17, 2020 are being recalled and removed from shelves for safety. Any customers who have already purchased the products are encouraged to either throw them out or return them to the restaurant for a full refund.

According to Richardson's statement about the recall, the announcement impacts about 72,000 packages. This accounts for 0.1% of White Castle's total annual production. And of the packages that were recalled, only 10% or less actually made it to retail shelves. "We are working closely with the FDA to make certain all future production meets the measure of the very highest and most demanding food safety standards," the statement concludes.