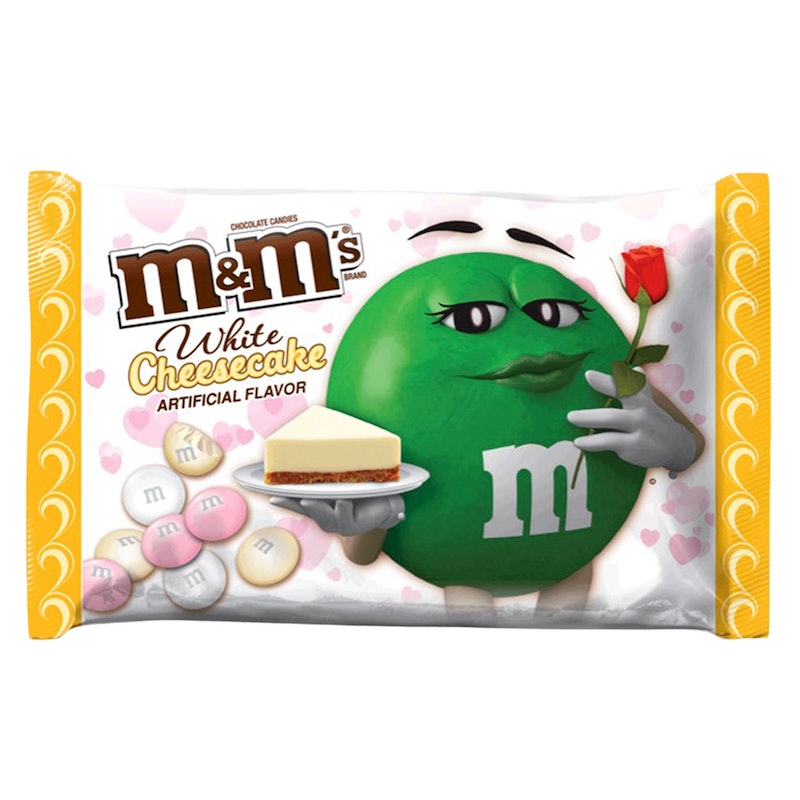 With Valentine's Day being the next big holiday after New Year's, red and pink treats are already hitting shelves. That includes some returning favorites, of course (conversation hearts, Reese's shaped like hearts, giant heart boxes of chocolate), but there are also some candies making their return that you might not have heard of. Like, White Cheesecake M&M's, which sound... um, intriguing.

The Instagram account Snack Spy, which is "on the lookout for new treats," posted about spotting the White Cheesecake M&Ms on December 31. It can be deduced from the other photos of treats hey posted at the same time and the boxes in the background that the M&M's were seen at Walmart. In fact, the M&M's are exclusive to Walmart "during the Valentine's Day season" and have been since their release in 2017. They are currently available in Walmart stores and online for $2.84. (There is also a listing for White Cheesecake M&Ms on Amazon via Sales Driver Direct, but it says they won't be in stock until January 9, and the price is listed as $10.98.)

The M&Ms come in light colors: white, pink, and a cheesecake-like pale yellow. According to PopSugar's 2017 review, they "combine white chocolate with cheesecake and graham cracker flavors" and are larger than regular M&Ms. The site did note that the graham cracker flavor was undetectable, but said that they reminded one taste tester of cream cheese frosting. Another taster said that there was a "distinct white chocolate flavor cut with a tart, cream-cheesy finish."

Meanwhile, the junk food blog Junk Banter hated them, writing that the white chocolate flavor tastes fine at first, but that there is a bad aftertaste of fake butter "and it wasn’t the delicious fake butter that you’d welcome on movie theater popcorn; it was the fake butter flavor that you find in Jelly Belly Buttered Popcorn jelly beans." Hmmm.

White Cheesecake M&Ms aren't the only limited-release flavor the brand has offered over the years. We all know plain, peanut, and even pretzel, but there are some other specialty varieties that might speak to you:

For Valentine's Day, M&Ms has also re-released the Triple Chocolate variety, which is currently available at Target. According to Delish, these feature a milk chocolate center surrounded by rings of white chocolate and dark chocolate, all in the usual crunchy shell.

You might not have heard of these, but the idea's pretty simple: Peanut M&Ms with white chocolate instead of milk chocolate. There are also plain White Chocolate M&Ms available.

Another Valentine's Day release, these are oversized M&Ms ("3x the chocolate per piece!") with messages on them like, "Ur cute" and "I <3 U".

These ones aren't available just yet, but the brand has confirmed that Hazelnut Spread M&Ms are coming in April 2019. It's like a Nutella M&M basically just not called that because... legal things.

While some of these seem more obviously tasty than others, if you want to find out for yourself if the White Cheesecake ones are tart and cheesecake-y or "pretty gross" (thanks, Junk Banter) now is the time to do so since they will only be available for a couple of months.