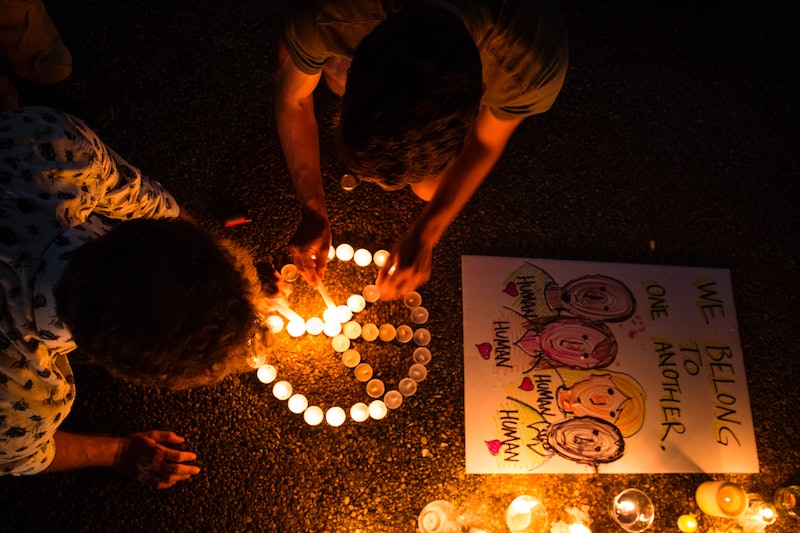 After thousands of white supremacists paraded openly in the streets of Charlottesville, Virginia, in August, many have wondered how to tackle the blatant, bare-faced racism in the United States today. Bustle posed this question to civil rights lawyer Rachel Godsil, who explained exactly how white Americans can reduce racial bias with methods backed by social science research. For her, it all comes down to effective communication.

Science would suggest that we begin with what the two of us share, which would be [in the context of Charlottesville] the genuine view that racism, anti-Semitism, and white supremacy are wrong. Start by affirming that."

In addition to being the co-founder of Perception Institute, an organization dedicated to translating "research into remedies," Godsil is also a constitutional law professor who has been working on civil rights for the past 25 years. And right about now, her decade's worth of neuroscientific research on racial anxiety couldn't be more necessary.

Talking about race is nothing new for minorities in America. People of color experience racism on an almost quotidian basis. But in the aftermath of Charlottesville, it became clear that many white Americans were having a difficult time believing that such blatant animus existed all along — right here in the United States.

Though sincere, hashtag campaigns like #ThisIsNotUs have been criticized by people of color who viewed the expression as a bout of historical amnesia among white Americans. It's as if some white people seemed to have forgotten — or straight-up ignored — the racism that people of color lived with everyday. But according to Godsil, there is hope.

With "great regularity," Godsil says she has witnessed white Americans make racist comments — both deliberately and accidentally. But she adds, "I do feel that [with] the tools from social science, people can see themselves in a certain way and their behavior [will] become totally the opposite. It can be very helpful." Gleaned from years of conducting workshops on racial bias, stereotyping, and sociology, Godsil shares two ways for white Americans to help unconvinced peers comprehend institutional and social racism.

Firstly, how can progressive white Americans discuss race with others in their community without it devolving into a full-fledged argument? More specifically, imagine a white progressive speaking with a white conservative who disagreed with white supremacists in Charlottesville as much as they did the counter-protesters.

I don't think there's any room for a 'both sides' narrative and I think Virginians know that."

Godsil says that finding "shared values" is one of the two ways to appeal to such a person's political sensibilities. "Science would suggest that we begin with what the two of us share," Godsil says, "which would be [in the context of Charlottesville] the genuine view that racism, anti-Semitism, and white supremacy are wrong. Start by affirming that. Then ask, 'Where do we differ?'"

In this case, Godsil says that white progressives should attempt to lay out the obvious differences between the torch-bearing Neo-Nazis of Unite The Right and the counter-protesters who refused to be complicit with supremacy. This method of meeting at a common ground works with someone who probably, as Godsil says, "doesn't get why race is such an issue." But she is quick to note that this technique may not work on a self-proclaimed Nazi, who would hold much stauncher views.

Explaining the differences to someone who's on the fence can explicitly show that there is no moral equivalency, says Godsil. Her views on the lack of a moral equivalency is corroborated by local Virginians themselves.

Gordon Phillips, a lawyer from Charlottesville, says, "I don't think there's any room for a 'both sides' narrative and I think Virginians know that. One side showed up with assault rifles. One side was photographed beating a defenseless man in a parking garage. Importantly, one side celebrates Donald Trump's account of the events while the other mourns it."

Perhaps Phillips' way of painstakingly enumerating the differences could open a racially-biased person's eyes to the events in Charlottesville, specifically, and the racism in America, generally.

The second method Godsil refers to is a successful series of studies which led to a phenomenon called the "extended contact effect." Conducted in the 1990s, this research showed how internal communication among homogenous members of a group could help decrease paranoia and fear of non-members. In other words, if a white person shows a racially conservative white person the good deeds of a person of color, the conservative white person is more likely to rethink his or her views. This is the effect through "extended contact."

"The extended contact theory tells us that people who they know and care about have relationships with people of other races and ethnicities can lead to a reduction in bias and an openness," Godsil says. If white people from more rural and homogenous communities see images of people of color only through media, they consume "distorted" portrayals of other races that are "inconsistent to other human beings."

In such a way, the extended contact theory familiarizes white people with non-white people through the contact of a white friend, sibling, significant other, neighbor, and so on. Communication like that will humanize a minority person's image. "People are surprised by specific stories," Godsil says.

Godsil's advice is for white people who want to help. Discussions about race are not the easiest conversation to have, especially when you're shielded by layers of privilege, but when done with consistency and empathy, it's likely to yield positive results. When asked what it fundamentally came down to, Godsil notes that the principal tenet of her approach is a fairly simple thing often absent in our conversations on race: patience.