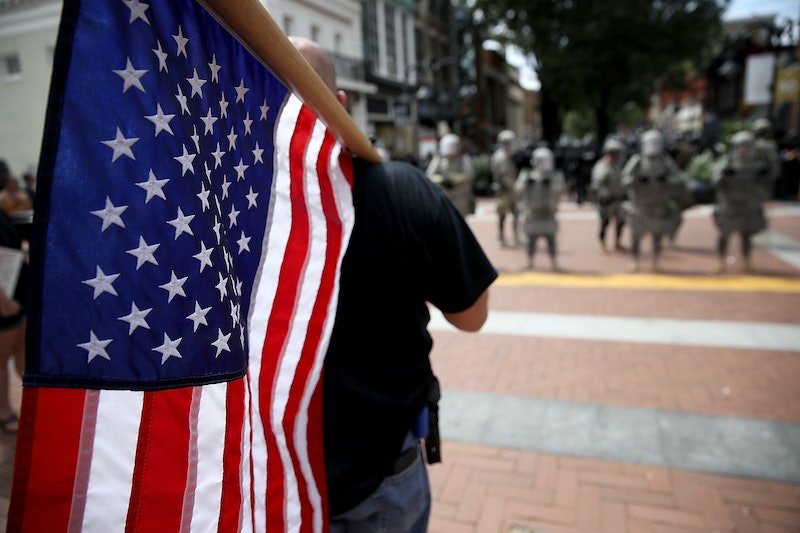 Within the past 12 months, white supremacist groups have made college students a much bigger recruitment target. A new report from the Anti-Defamation League shows a steep increase in white supremacist outreach on college campuses in 2017 compared to 2016. Researchers at the ADL tracked white supremacist banners, stickers, posters, and flyers on campuses across the nation.

In the fall semester of 2016, the instances of such paraphernalia numbered 41. But during the same period in 2017, the ADL recorded 147 cases. That amounts to a 258 percent uptick in just one year of white supremacist propaganda displayed on college campuses.

Noting that white supremacist groups are going after college students "like never before," the CEO of the ADL, Jonathan Greenblatt, said in a statement, "They see campuses as a fertile recruiting ground, as evident by the unprecedented volume of propagandist activity designed to recruit young people to support their vile ideology.”

Posters, pamphlets, flyers, and stickers promoting white supremacist groups have shown up on campuses in 44 states and Washington, D.C. Of all the states, California and Texas were hit most often.

The most prolific group behind these outreach efforts is Identity Evropa. Founded in 2016, the group is new compared to other organizations, but it was behind 158 of reported cases, or nearly half of all white supremacist campus activity in the fall of 2017.

It's possible that some white supremacist efforts on college campuses are aimed at provocation, not necessarily recruitment. In an April interview with NPR's Scott Simon, the president of Emerson College, Lee Pelton, discussed incidents of white supremacist propaganda from a group called America Vanguard popping up at the "famously progressive" liberal institution he heads in Boston.

"It's hard to imagine that anyone who knows Emerson would think that it would in fact be fertile ground for recruitment," Pelton said. He went on to say he believed it was done to "intimidate our community and also to get us to respond in a way that would allow it to recruit members from around the country."

But Identity Evropa says it specifically targets universities based on their curriculum. In an interview for Vice, Tess Owen spoke with one of the group's coordinators, Jack Richardson. He organized a campaign at Purdue University called "#ProjectSiege" that featured flyers depicting the group's Germanic "Dragon's Eye" symbol. Others had "Our Generation; Our Future; Our Last Chance" overlaid on sunny pictures of white men in button-down shirts.

Richardson told Owen that Identity Evropa singles out schools that employ what he calls an "anti-white" bias in their curriculum. He said the group believes there are frustrated and disenfranchised white students on those campuses, who feel "alienated and disillusioned." Those are the types of individuals Richardson believes are open to his group's message of white supremacy.

Identity Evropa's founder is Nathan Damigo. He's a former Marine who suffered from Post-Traumatic Stress Disorder and substance abuse after serving two tours in Iraq. After returning to the United States, Damigo was convicted of armed robbery and spent four years in jail.

"Because you have nothing but time to think in prison, that's when I finally started looking at the more intellectual roots and started researching books and literature on race and identity," he told the Los Angeles Times. He emerged from prison with views steeped in white supremacy.

College administrators have so far allowed flyers and posters from white supremacist groups to go up on their campuses, citing the need to protect freedom of speech. But not everyone is happy with their response. Purdue's president, Mitch Daniels, came under criticism for what many viewed as his tepid rebuke of the propaganda.