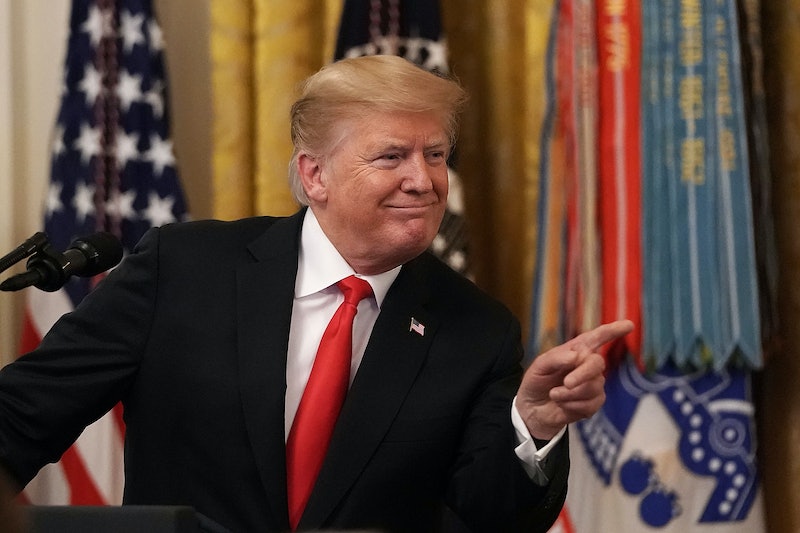 The president likes to talk about his popularity. He talks about it often, and if the public is quick to forget, he's quicker to remind them on social media. And President Trump's popularity talk is often punctuated by his loose references to his many friends, but those who make up Donald Trump's closest friends are not always in the public eye, per a New York Times report.

Before Trump's rise to the Oval Office, his closest buddies were fellow businessmen on the real-estate circuit in New York City, according to The New York Times. And the BFF circle was apparently small. In 2016, Trump's spokesman named Richard LeFrak, also a real-estate tycoon, and Howard Lorber, the president and CEO of Vector Group, a holding company of real estate and cigarette concerns, as Trump's closest friends.

“Donald has some friends like me, but he’s much more of a homebody than you’d think,” LeFrak said to the New York Times. “He’s very gregarious and has lots of acquaintances. But people that he’s close to? Not so many.”

People may recognize LeFrak as one of the named chairs of Trump's infrastructure council, a group originally formed to improve the nation's roads, bridges, and other public works. (Though Trump announced the council before his inauguration, the White House has since announced the council never existed, The Real Deal reported.)

But the relationship between the two isn't recent; according to Town and Country, Trump and LeFrak go all the way back to their budding businessmen days. The two friends came up on the real estate scene together. The outlet reported that the two both made their first fortunes with apartment buildings in the outskirts of Manhattan. LeFrak is also a familiar face in the halls of Mar-a-Lago, where he's been a guest for more than 10 years, Town and Country reported.

“If we’re both in Florida, Donald might call and say, ‘Come have dinner at Mar-a-Lago,’” LeFrak said to the New York Times. “But if I tell him, ‘Why don’t you come down to Miami,’ he might say yes, but he probably won’t do it. He’s very much a creature of habit. He doesn’t like to leave his own environment.”

But you don't usually hear those two friends mentioned in the president's speeches. Instead, Trump has name-dropped several sports and music celebrities while speaking in public. Some of those names include Tom Brady, the late George Steinbrenner, Kanye West, and Howard Stern. While it's unclear how close the president is with each celebrity, it's safe to say they've all at least brushed shoulders with him. For instance, Trump and Brady got to know each other at the 2002 Miss USA pageant, according to The Daily Beast, when Trump invited Brady on as a judge right after the quarterback won his first Super Bowl. Their friendship slowly grew from there, with golf outings and and public appearances over the years, Elite Daily reported. Last year though, Brady did call Trump's NFL comments "divisive."

As for the friendship with West, that dynamic still seems to elude public understanding, but Trump did say the two have been "friends for a long time," according to CNN. In fact, West recently visited the White House, where he said Trump was on a "hero's journey."

While the president does love a large crowd, nailing down more identities of his closest friends can be tough because of the president's liberal use of the word, which recently backfired on him.

But blood will always be thicker than water, and perhaps Trump's truest inner circle is his family, who have loyally and diligently protected his controversial policies since the start of his campaign. And while friends can come and go, family is usually the best bet for loyalty, the quality Trump seems to prize above all else within his inner circle.