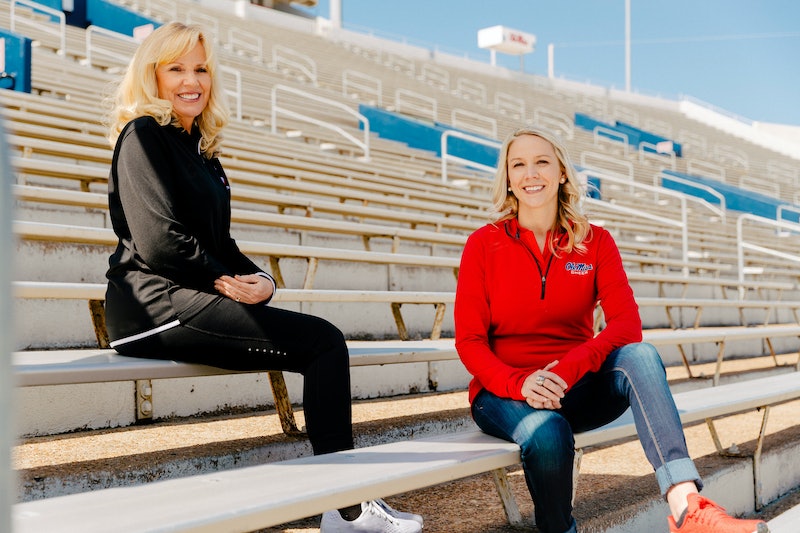 No one knows cheerleading like Donna Martin and Ryan O'Connor. The Cheerleader Generation stars have been in the business for actual decades. According to a trailer for their new Lifetime reality show, Martin has been a cheerleading head coach for 30 years, and now her daughter is the coach for the University of Mississippi team. They've made cheerleading a family business.

Now they want to both win national titles with their respective schools in the same year. It's this journey that Lifetime is following. (The 2019 cheer championships have already happened so you can look up the answers if you want to be spoiled.) Martin and O'Connor have actually already been on reality TV twice before in relation to cheering. According to Starcasm, they previously appeared in a 2001 episode of True Life: I Am A Cheerleader, as well as the Lifetime series Cheerleader Nation in 2006. When the first Lifetime show aired, O'Connor was actually on her mother's high school cheer team at Kentucky's Dunbar High School. O'Connor won four national titles at Dunbar, and Martin still coaches there today, having earned a total of eight national titles in her 30 years of coaching.

While O'Connor appreciates her mother's expertise in the arena, O'Connor thinks that her own experience as a cheerleader adds something extra to her coaching skills. "I am still able to physically do some of the skills I am teaching or I have done them in the past," O'Connor told Starcasm. "I think my college kids respect the fact that I have cheered and competed at the highest level of our sport."

Martin admitted in a Lifetime Instagram video that she can sometimes get caught up in the high school dramatics of her own team. She said that sometimes her cheerleaders can feel like her own kids. "Watching you makes me stronger," Martin said to her daughter, who is described as having more of a "black and white" approach to the sport.

Martin has been in the coaching business for three decades now, but she wasn't always in that profession. Starcasm reported that Martin was originally a biology teacher. O'Connor also had different jobs before turning her attention to coaching. Her LinkedIn says she graduated the University of Alabama with a degree in journalism. She then went on to work as a writer for Inside Cheerleading magazine and later as the managing editor for American Cheerleading magazine. She then switched to marketing and media for various cheerleading affiliated companies like Varsity Brands, ACE Cheer Company, and the University of Alabama at Birmingham's cheer team. O'Connor has now been the coach of Ole Miss for two years.

"Coaching is not a job that you do for money and it is not a job that is for the weak-hearted," O'Connor told Varsity TV after she landed the job. "It is by far the biggest challenge in my life, but I am loving how much I am learning from my athletes."

O'Connor cited her mother as her biggest inspiration in her Varsity TV interview. Together, they hope to show the world how tough cheerleaders actually are. "I think [viewers] going to be incredibly surprised and impressed with how athletic our kids are and how much athleticism it does take," O'Connor told PopCulture. "I think it will help cheerleading gain respect."

Win or lose in the championships, O'Connor and Martin are already winning just by being in the sport they love and helping share the true nature of it with the world.