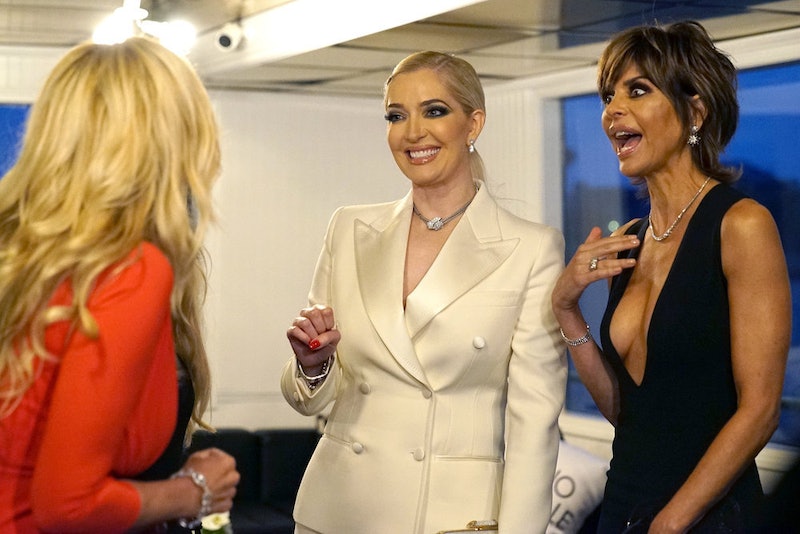 Whether she’s Jayne or Girardi, Erika from The Real Housewives Of Beverly Hills is a force of nature. Thanks to Mikey and her glam squad, she always looks fierce; she’s always ready with a quip or funny line; and she is open about her ambition and her love for performing. There’s really nothing she can’t do! That being said, viewers don’t know a ton about Erika’s personal life, the life before she came to Beverly Hills. Who are Erika Jayne’s parents, for example?

Erika’s family is the only thing that reveals her softer side, and we first got a glimpse of it when Erika’s mother, Renee Chahoy, visited Beverly Hills for Erika’s 45th birthday party in Season 7. Chahoy is a classically trained pianist, and she and Erika are close. But that’s not to say that their relationship has always been easy. On The Real Housewives Of Beverly Hills, Erika has spoken about how she felt that, because her mother had not been able to fulfill her own dreams of performing and stardom, she pushed them all to Erika, and that was a lot of pressure for a young person to have to absorb. Erika has said repeatedly that her mother was hard on her, and that made her a hard-edged adult.

In one touching moment, Erika’s mom ended up apologizing for the pressure that she inflicted on her daughter from an early age. In an interview with Bravo, Erika said that she was nervous to let that soft side show. “I was very hesitant. I didn't want to do it, but I ended up doing it," she said. "And I think a lot of people will be able to relate to my mother's and I's relationship."

Erika’s mother is still in her life, but as for her father? I couldn’t find a single thing about him. In fact, the first time that Erika mentioned her father was in the second episode of Season 8 of The Real Housewives Of Beverly Hills. Teddi Mellencamp, daughter of John Mellencamp, was talking about how her upbringing with her famous father was probably the same as anyone else’s. Erika confessed then that she met her father for the first time when she was well into adulthood, and that when they met, they shook hands. “The first time I met my father was when I was 25. I was visiting here in Los Angeles, I had not moved here yet. And he came down to meet me,” Erika told the group. “It wasn’t emotional, it was like meeting a stranger.” Erika’s mother had Erika when she was only 18, and her father left when Erika was only nine months old. Instead, Erika calls her grandfather “the only father I’ve ever known.”

But despite growing up without her biological father, Erika said that she didn’t feel like she’s less for it. “I don’t feel like I’m missing something in my life,” she said. “It’s okay in hindsight because everything turned out good … I don’t have this relationship but I have a lot of other fabulous relationships. I have a great marriage, great son, great family.” In previews for the Jan. 2 episode, Erika reveals that her father made a comment about the fact that neither he nor his wife had any children, and that stung.

Even though Erika is essentially estranged from her father, it’s wonderful that she has a positive outlook on the whole thing. Erika is a very strong person, and she’s not prone to pity parties, but this situation would be hard on anyone. But Erika’s focus is on what’s good in her life — her husband, her mother, her son, her career — and that positivity is what can carry her through any bad time. No one can change their parents, no matter how hard they try.