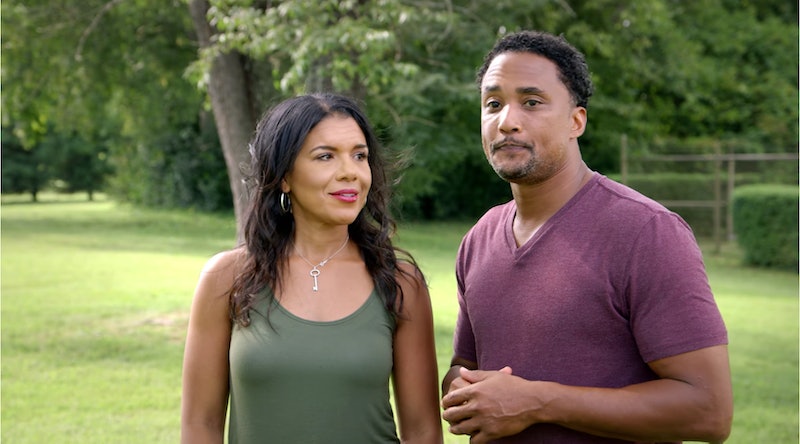 On Thursday, Jan. 18, the world met Page Turner and DeRon Jenkins of Flip Or Flop Nashville. The pair are charming, amicable exes making their TV debut as house flippers on HGTV. The two have known each other for over 10 years, dated, split up, and now work renovating houses and selling them for profit. Most people don't even want to grab brunch with an ex, let alone work together on a project on TV. Page and DeRon are different, they have a hilarious friendship and seem to work well together, profiting from a unique combination of skills.

Page is a real estate broker and vision building strategist at EGAP Real Estate, Incorporated, according to her LinkedIn. According to an HGTV article, DeRon took a much less traditional route to house flipping. While playing for the Baltimore Ravens in the NFL, his interest in working on houses began when he bought his first home. He played in the NFL for seven years, eventually found himself in Nashville, and then began his second career. Another HGTV article reported that DeRon and Page met in Nashville when he was a contractor and she was a real estate broker. While their romance did not work, their professional relationship proved quite successful.

DeRon spoke to HGTV (per the above article) about his passion for house flipping. To him, it is more than just about making a profit, but about building up communities. He told the network.

"After my seven-year career in the NFL, I still had the passion to renovate, to make something older look beautiful and new again. And I was in Nashville. And I love this city. And so I decided to make this city beautiful—and that’s where I landed ... My mission ever since has been to transform this city one house at a time."

In the first episode, which premiered on the official Flip Or Flop Nashville YouTube channel before it aired on HGTV, Page and DeRon transform a home in an up and coming neighborhood. They both approach the project with mutual excitement and a penchant for artistry. Their mutual love for house flipping is what makes their professional relationship work, despite any complicated romantic history.

Even with a positive working relationship, they do still slip into moments of ex bickering, which is quite entertaining to watch. In the first episode for instance, Page buys the home without asking DeRon first. DeRon replies that her always having to be right is allegedly part of the reason they broke up. The tone between them is playful yet honest, something that definitely makes for good television.

Flip Or Flop Nashville officially premieres Jan. 18 on HGTV. Tune in for the incredible home makeovers, the will-they-or-won't-they finish the project in time drama, and of course this wonderfully dynamic pair. Page and DeRon bring new life to the series with their unique history and combined skills. (He focuses on the construction, putting together a home for her to sell.) It's a one two punch from this powerful team. And, as Flip Or Flop Nashville is a spinoff show from a much larger Flip Or Flop series, it's likely to find success with the dynamic Page and DeRon at the helm.

More like this
Shaq Might've Spoiled His Relationship Status With Kirsten After 'MAFS'
By Brad Witter
Airris From 'MAFS' Says He Doesn’t Regret Going To Decision Day With Jasmine
By Brad Witter
All The Clues Zach & Christina Are Together After 'The Bachelor'
By Grace Wehniainen
Are Richard & Vika From 'Bling Empire: New York' Still Together?
By Karen Fratti
Get Even More From Bustle — Sign Up For The Newsletter
From hair trends to relationship advice, our daily newsletter has everything you need to sound like a person who’s on TikTok, even if you aren’t.