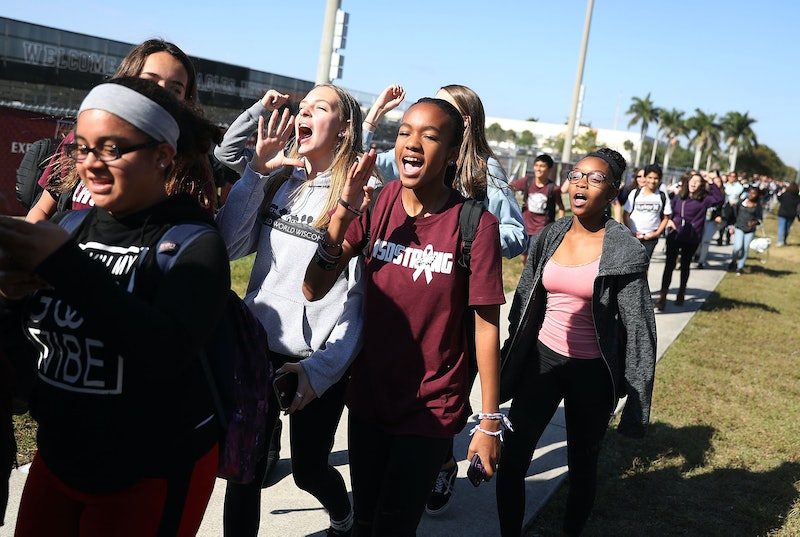 So many people are expected to head to Washington, D.C., on Saturday morning that the March for Our Lives might turn into a standing room-only rally. That will make the student leaders on stage even more important to the success of the protest. The names of those who will be giving speeches have been released, and notably, the March for Our Lives speakers will all be younger than 20 years old.

They'll be joined by performers — some of whom do qualify as adults — but the activists taking the mic are all 19 or younger. The top headliners are the Marjory Stoneman Douglas students who organized the event in a response to the Valentine's Day shooting at their high school. Theirs are names you'll recognize: Emma Gonzalez, David Hogg, Cameron Kasky, and more. In total there are 10 set to speak.

In addition to the MSD students, there will be others from across the country who have been affected by gun violence. A number of them are from Chicago, including Alex King, a senior at Chicago's North Lawndale College Prep High School. His nephew was killed in a drive-by shooting in 2017.

King, 18, said that he was affected by the Parkland shooting too, even though he wasn't there. "When I saw what happened, it automatically hurt me as well as it hurt the Parkland students, because no one's life should be lost, especially in a place, an environment, where you think that you are the safest — in school," King told WBUR's Here & Now.

Edna Chavez, a 17-year-old from Manual Arts High south of downtown Los Angeles, will also be speaking. Her brother was killed outside their family home when he was just 14. She also criticized the status quo and explained how school shootings affect all young people — even if their school is not targeted.

"We've had a couple of lockdowns at school this year," Chavez told The Los Angeles Times. "I can tell you straight up I've seen my peers build up that trauma and anxiety .... We learn how to duck before we learn how to read."

Not all the speakers are teenagers, though. Some are even younger. Christopher Underwood from Brooklyn, New York, is just 11. He was only five when his brother was shot in the head. He's a seasoned speaker, addressing crowds two years ago on the issue.

"I have to use my voice to honor them, to fight for them," Underwood told the crowd at a Moms Demand Action rally in 2017. "I may be just nine years old, but when I open my mouth, the voice that comes out is strong and can make a difference."

In addition to the speakers will be the performers. Among the top names are Ariana Grande, Demi Lovato, and Miley Cyrus. Lin-Manuel Miranda of Hamilton fame together with Ben Platt will perform the song inspired by the movement, "Found Tonight."

And that's just who's taking the stage in Washington, D.C. As many as 1,000 Parkland students are fanning out across the country to ensure that their message is present at many of the sister rallies that are happening nationwide and around the world.

With this many students taking action — and speaking as leaders — this is just the first step in the Never Again movement.