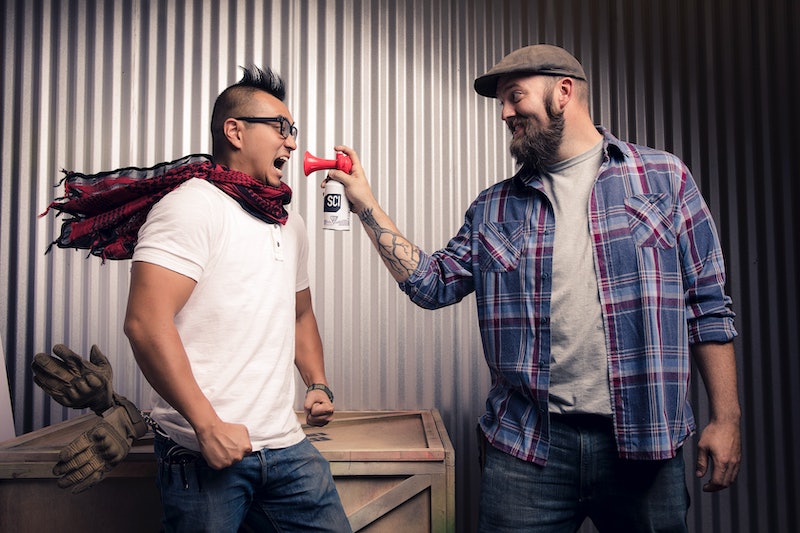 For those among you who had been feeling a bit blue in light of recent headlines, here’s one that’s objectively good. Mythbusters is returning, and with some brand new faces to boot. But, who are the new Mythbusters hosts? Starting Wednesday, Nov. 15 at 9 p.m. ET, Jonathan Lung and Brian Louden are taking over for former hosts Adam Savage and Jamie Hyneman as the show debuts on the Science Channel.

The need for new hosts came out of the announcement two years ago that the original Discovery Channel version of the show would be ending after 14 seasons. Savage told Entertainment Weekly in 2015 how he felt about leaving the show after so long, saying, “I can tell you I’ve been going through all the Elisabeth Kubler-Ross stages of grief — anger, acceptance, denial — it’s all been happening,” Savage said. “I did the math at some point, I spent something like 25,000 hours filming.” For those of you keeping track, along with those 25,000 hours, the original series also featured nearly 3,000 experiments over the course of its 13-year original run, per EW.

But, in 2017, nothing really ends forever, thanks to reboots, revivals, and reimaginings of treasured series — and that’s exactly what happened with the new Mythbusters. To find the new duo that would serve as the hosts, a new series was created titled, Mythbusters: The Search and that’s where Lung and Louden made their entrances and eventually won the right to host the show.

That show featured 10 hopefuls (obviously including Louden and Lung) who all vied for the ability to host the new revived Mythbusters series. The 10 quickly whittled to four, who were then tasked with a myth to bust: Would someone be able to escape prison using a rocket-propelled water heater?

The winners ended up being Lung and Louden — neither of whom, before appearing on Mythbusters: The Search, were involved in television or knew each other. Lung was a product designer, and Louden was a pilot and rescue diver, according to Engadget. So, will the pair become as iconic as the original duo? Who knows. But, hopefully, they will like each other more than Savage and Hyneman did. It wasn’t exactly a secret that the former hosts weren’t particularly friendly and certainly didn’t hang out after their shows were taped. According to Business Insider, Savage had this to say about their relationship offscreen:

"Jamie and I make no bones about the fact that we're not friends ... We don't get along very well together on a personal level. In 25 years we've known each other, we've never had dinner alone together."

The new show with its new hosts will still be titled Mythbusters, and according to Deadline, the series’ first returning season will feature 14 episodes. While not much more is known beyond that, there are a few hints about what future episodes will entail. In a trailer that was shared by Popular Mechanics, the pair mentioned several upcoming experiments — including making a rocket-sword and picking up a dead body to use as cover during a gunfight. And, as seen in the above photo, fans can definitely expect some explosions ahead.

As for what each of their ideal myths to bust would be, according to the network, Lung would like to test whether a bullet shot around a corner could bend and hit you. And, Louden wants to test the validity of growing potatoes on Mars with the help of human poop — á la the movie, The Martian with Matt Damon. Since the latter sound a tad tough to complete, fans shouldn't expect to see that happen — at least probably not on Season 1. But, there are a lot of other exciting myths ahead for the new hosts and fans, and viewers can check them out Wednesdays on the Science Channel.