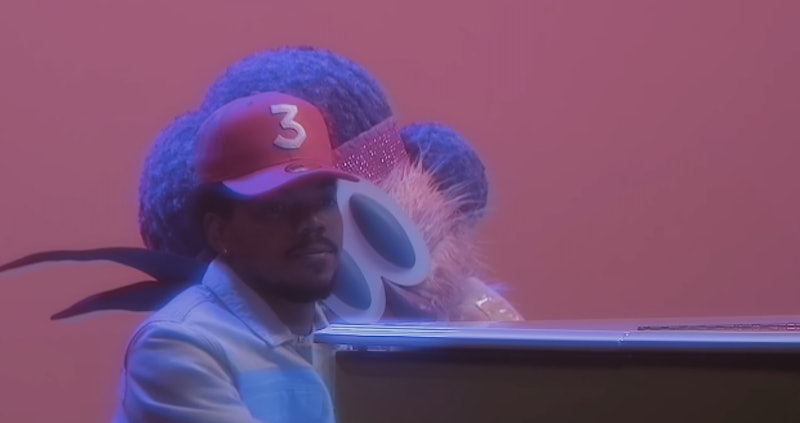 No, there's something slightly off about the "Same Drugs" puppets but it's kind of endearing and silly. There's one that chance sits at the piano with for a majority of the music video. The puppet is life-size, sporting Princess Leia-style buns and big doe eyes. It appears to be a stand-in for singer Eryn Allen Kane, who can be heard singing through the puppet with Chance.

Much in line with the song, it would appear that Chance and the puppet are not on the same wavelength. At various points, the puppet tries to cozy up to Chance or get in sync with him, but he shrugs the puppet off or seems totally unenthused by his partner's antics. It seems that he and the puppet are definitely not on the same musical drugs in this video and the vibe is just not right. Chance grows tired of the shenanigans and decides to finish the song standing up before exiting the sound stage and building, which appears to be inhabited by other puppets.

Chance has yet to completely detail what led him to choose to share a stage with a life-size puppet, but the overall effect is delightfully trippy. Much like the subject matter, the video capitalizes on the strange and alienating effect taking certain drugs might have (or so I've read because I definitely wouldn't know anything about these things you call "drugs") but using bonkers puppets as performance partners.

The puppets, which were decidedly not created in the style of Muppets nor were they officially Muppets, did maintain the fun, vibrant vibe throughout. Chance definitely delivered his most colorful video to date and, because of it's kitschy weirdness, it may be his most amusing, too.