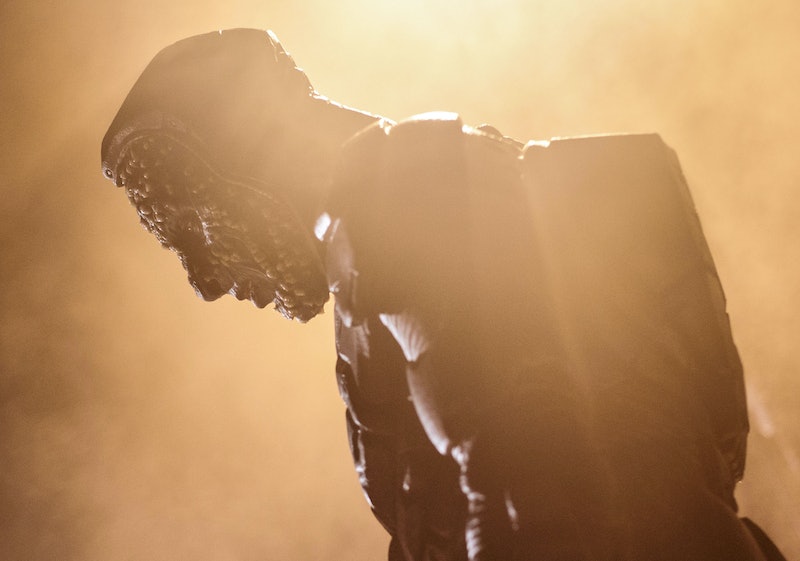 Listen, we’re all in agreement that the best Doctor Who villains are the Weeping Angels, and anyone who suggests otherwise clearly hasn’t made a sound judgment in their lives, yes? But with that out of the way, I’m happy to acknowledge that the newly introduced Stenza are a solid addition to the canon — and it looks like they’ll play a pretty significant role in series 11. So who are the Stenza in Doctor Who? Here’s everything we know so far.

The Stenza (or rather, one Stenza) were the central antagonists of Jodie Whittaker’s first full-length episode as the Doctor, “The Woman Who Fell To Earth." Samuel Oatley's T’Zim-Sha, or Tim Shaw to the Doctor, came to Earth to hunt a human (Self-Help Tapes Karl, played by Jonny Dixon), in order to prove his worth as a Stenza leader. His victims en route to Karl included Rahul (Amit Shah), whose sister Asha was previously abducted on another Stenza hunt. And how does a Stenza warrior commemorate a kill? By extracting a tooth and embedding it directly into their face. Might I suggest, as a slightly less horrifying alternative, creating a nice murder scrapbook instead?

Handily for the more forgetful Whovian, the BBC created a “Case File” on the Stenza (and will presumably do so for every villain encountered), narrated by Mandip Gill’s Yaz:

T’Zim-Sha, of course, was ultimately outfoxed by the Doctor, and many probably assumed that’s the last we’d see of the Stenza for the rest of the series. After all, showrunner Chris Chibnall told Collider that this series would comprise 10 standalone episodes, as a deliberate move away from predecessor Steven Moffat’s elaborate series arcs. “With stand-alone stories, you can come in and not need any knowledge,” Chibnall told the website. “That felt really useful this year. It’s like a series of pilots.” He did, however, indicate there’d be some recurring aspects, saying that “there will be rewards for people who’ve been there since episode one.”

And one of those aspects turned out to be the Stenza. In the second episode of the series, “The Ghost Monument,” Susan Lynch's Angstrom referred repeatedly to the “cleansing” of her home planet, but didn’t indicate straight away who was responsible for the massacre. The Doctor subsequently found a message left by the scientists who — after being abducted and tortured — created the many horrors that ravaged the planet Desolation. The scientists attempted to destroy their work before their captors returned — and those captors were the Stenza. The Stenza, too, ravaged Angstrom’s planet, resulting in the death of her wife and the separation of the rest of her family.

That’s about all we know so far about the Stenza; we don’t know why they’re murdering the population of entire planets, or why they forced scientists to create the various horrors that stalk Desolation. What we can assume with some certainty is that they’ll reappear this series, and the full scope of their presumably hideous plan will be revealed. A quick plea: please, please let it not involve teeth.