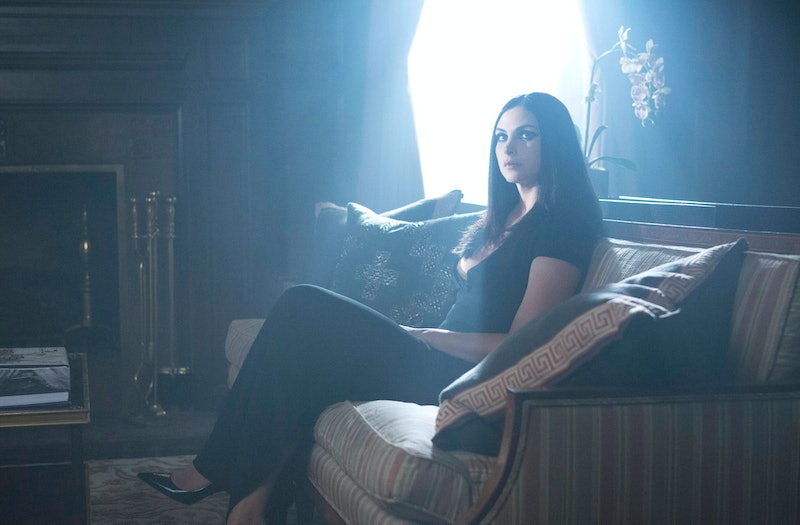 Leading up to the Gotham Season 3 finale, actor David Mazouz (Bruce) told Moviepilot that DC character Harley Quinn would "be in the finale" of Season 3. To be honest, if she was in the June 5 episode, it wasn't obvious. And the character's appearance wasn't strongly foreshadowed the way other new characters' comic book origins have been telegraphed. Hell, even the revelation that Butch's real name is Cyrus Gold, the alter-ego of DC's Solomon Grundy, was underlined emphatically by a few faceless doctors (neither of whom seemed to be Harley, by the way). Common sense dictates that an existing character will transition into the clownish villain. So who will become Harley Quinn on Gotham?

Harley Quinn has had a life in the comics, of course, but she originated in Batman: The Animated Series. The villain's given name is Harleen Quinzel, and she served as the Joker's psychiatrist while he was incarcerated at Arkham Asylum. They eventually begin a co-dependent love affair. Once she embraces her evil side, she is a trusty sidekick of the Joker's and a villain in her own right. In some stories, she's also been with Poison Ivy, and that seems like a relationship Gotham might explore, since it already has several LGBT characters.

The finale doesn't feature any new characters besides Ra's al Ghul. No suspiciously cheerful woman hangs out with Ivy and Penguin as they intimidate Ed or as plan out the opening of the Iceberg Lounge (another extremely obvious nod to the comics). Selina doesn't have any new friends pop up in the episode either, and the brief time spent with Arkham patient Jervis Tetch doesn't include a female doctor. So, that eliminates pretty much every opportunity for a new character to become Harley in the finale.

But there are a few solid possibilities within Gotham's existing characters. Lee has had a hard time this season, and certainly was pushed to the brink of villainy when Jim, her ex-boyfriend, killed her new husband, Mario. However, in the finale she promises that she's leaving Gotham City (again), and really seems to be back to her old self. She is a doctor, so that's a connection, but unless the note she left for Jim was a lie, she doesn't appear to be on the verge of becoming a villain again.

That leaves Barbara, who has been the subject of much Harley Quinn speculation for some time. Erin Richards told Cinemablend, "There have been conversations. I think something major would have to happen to Barbara for her to fully become Harley Quinn." (Would dying by electrocution count as "something major?") Richards continued, "I think if she was to then morph into Harley Quinn [...] she would just become, I guess, unhinged in the world. That, to me, is what Harley Quinn represents. That madness and mayhem that comes along with The Joker, because obviously they're a team."

Barbara has already become far more unhinged than she was in the first season, she's gone through a major trauma (death), and she used to pal around with Jerome, Gotham's version of the Joker. In my estimation, Barbara's death scene was perhaps the first glimpse of Gotham's future Harley Quinn. But confirmation probably won't be forthcoming until the show returns for Season 4 in the fall.