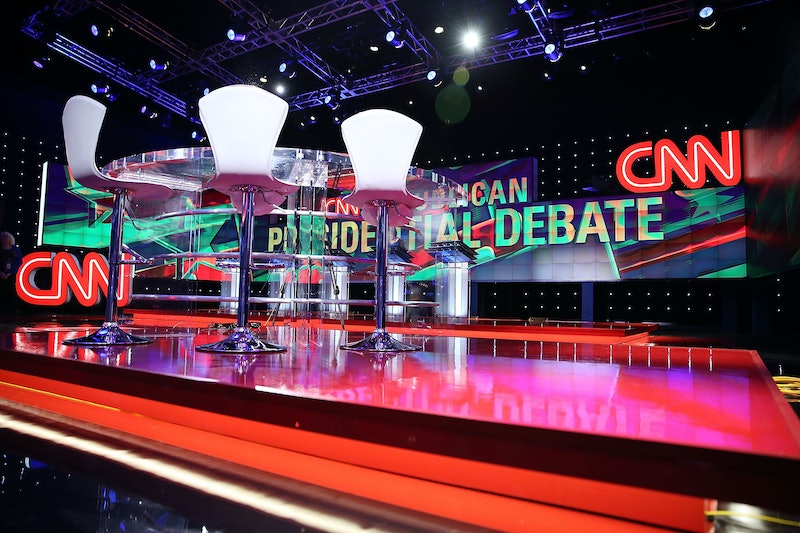 With at least 20 Democratic presidential hopefuls in the arena, the upcoming primary debates could be candidates' chance to really set themselves apart from the rest. And more likely than not, that'll involve answering questions about the topics that are most important to you. Though the public doesn't always get to find out who chooses each primary debate question, it looks like news outlets hosting the debates have a big say when it comes to which topics are brought up on-stage.

Come summer, you can expect to see senior journalists from both NBC News and CNN ask the big questions during the debates. Although there isn't a great deal of recent info on the subject, journalists like Jacob Leibenluft (who is now the vice president of policy affairs at the think tank Center for American Progress) have tried to shed light on moderation rules, criteria for questions, debate decorum, and more.

Technically, per Leibenluft, the Commission on Presidential Debates decides the decorum and general format of a presidential debate. On the other hand, media outlets appear to shape and execute the programs for primary debates. In 2008, Leibenluft reported for Slate that the moderators for a presidential debate are often given carte blanche as to what they'll ask candidates. He reported that the moderator had "near-absolute control" over the questions that were aired.

According to the Slate article, a leaked 2004 memorandum from the Commission on Presidential Debates contains some straightforward guidelines for such events. The commission, for example, directed moderators to use "his or her best efforts to ensure that the questions are reasonably well balanced in all debates … in terms of addressing a wide range of issues of major public interest facing the United States and the world."

It's possible the same guidelines apply to primary debates. In 2016, Vox reported that the media seems to play the role of a "gatekeeper" when it comes to who appears in a primary debate and what kind of questions are ultimately asked.

While the information about who chooses the questions for primary debates seems scant, the importance of these debates is undeniable. Researchers have long argued how crucial the events are when it comes to influencing voters. In 2017, University of Missouri communication professors Mitchell McKinney and Benjamin Warner wrote a study on how the performance of candidates in presidential and primary debates ultimately pushed voters in favor or against a presidential hopeful.

Although Vox reported that media outlets tend to have the most control over the format and content in primary debates, voters also have some voice in the matter. For example, CNN anchor Don Lemon posed questions for candidates sent by voters on Facebook during a Democratic presidential debate in 2015. In fact, bipartisan groups like the Open Debate Coalition have recently pushed for incorporating voter-generated questions into even more debates.

Overall, it looks like news outlets have the biggest role in selecting questions during primary debates. But as time goes on, it's likely that voters could have more of a voice too, which means candidates — both Democrats and Republicans — will have to address the public directly.