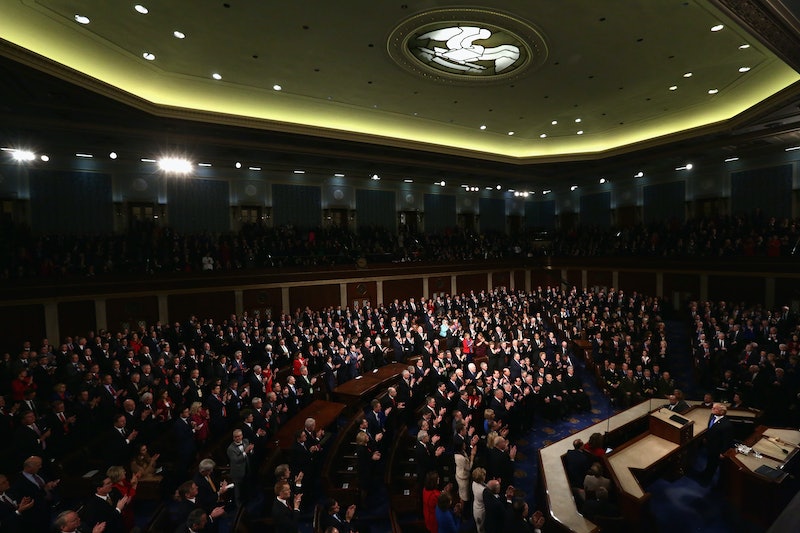 All 435 seats in the U.S. House of Representatives were up for election on Tuesday, and who controls the House now after the 2018 midterms will determine whether or not the next two years on Capitol Hill will be roughly the same as the last two. It looks like business won't continue as usual though, as Democrats took back the House, CNN and NBC News projected. Fox News has also projected a House takeback for Democrats.

Political analysts at FiveThirtyEight predicted ahead of the midterm election that the Democratic Party would win the majority after eight years in the minority. In order to do so, they needed to flip 24 GOP seats, and about 48 were considered competitive by The New York Times. More than 30 Republicans didn't seek reelection, as The Times notes, though many of their seats were expected to remain in GOP hands.

The record number of women running for office this year, along with an extremely divisive president, played a big role in shifting many House races from Republican strongholds to tossups. After nearly 500 women entered House primaries, 237 advanced to a midterm general election, by the Center for American Women and Politics at Rutgers University's count. The vast majority ran as Democrats, and just 22 percent of the women candidates who won a primary were Republicans.

NBC News was one of the first outlets to project that the Democratic Party would regain control of the House, something the party had not done in eight years. A party needs to control 218 seats in the House for a majority, the network noted, and some of the crucial elections that allowed NBC News to call a Democratic majority included ones in Minnesota, Colorado, Florida, New York, Virginia, Texas, and Michigan.

The Democrats' recapture of the House will give the party new power to challenge President Trump for the next two years of his presidency. Prior to the midterm elections, Republicans controlled both the House and the Senate. CNN, NBC, and Fox have also projected that Republicans will hold on to their majority in the Senate, establishing a politically-split Congress until the 2020 elections. The GOP control of the Senate will continue to lift Trump's agenda, Fox News reported, allowing Republicans to have the final word on all federal judicial appointments, which includes nominations to the Supreme Court.

But with Democrats in the House, the party will now have the ability to stop or delay several things that Trump has repeatedly pushed for, like funding for his controversial border wall and a recently-proposed middle-class tax cut. As Fox News noted, even if Democrats don't block the president on his legislative goals, they can still squeeze concessions out of the Republicans on hot-button issues like immigration before bills turn into law.

The Democrats' majority presence in the House also means they will have to select a new speaker of the House, a position that Nancy Pelosi held from 2007 to 2011. But with the sea of new faces and the theme of change, there's the possibility the party will look beyond Pelosi for the job this time around.

The two years to come will surely be different from the two that preceded it, and with an injection of progressive newcomers in an incredibly hostile political climate, it's anyone's guess what's to come.

Lauren Holter contributed to this report.