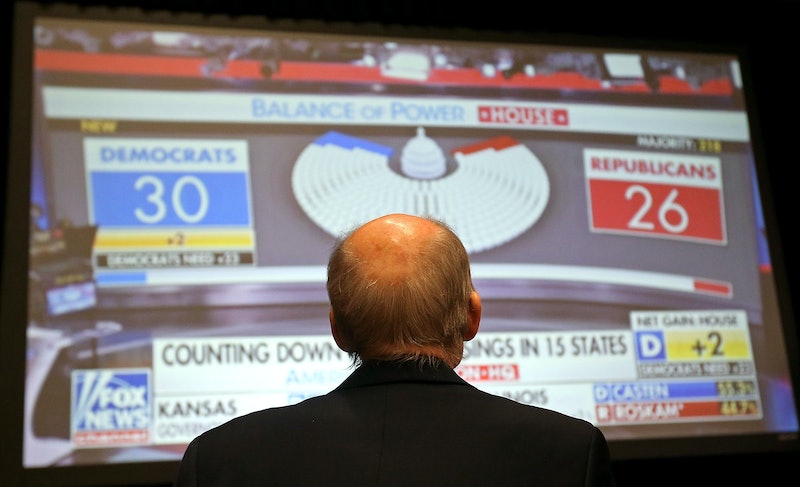 There are a lot of races to follow in the midterm elections, but on the federal level, they all boil down to the bigger questions of which party ends up controlling each house of Congress. Since that the results have finally come in, we finally know who controls the Senate now: the Republican Party has retained control of the Senate, as polling had suggested, and it even gained upon its majority.

Pollster Dan Cox referred to the Democrats' election map as "historically difficult," according to The Hill. Reuters reported that another political analyst said that the Democrats had “an almost impossible map” to work with. Just last week, CNN analyzed the races that the Democrats needed to win for a Senate majority, and found polling in several of the key races pointed to Republicans winning handily in each of them.

The GOP entered Election Day with a 51-49 advantage in the Senate. And though there are a few Senate races that might not be called until much later in the evening, it no longer matters: NBC reports that by the late evening on Tuesday, the GOP had gained two Senate seats, solidifying its presence in the Senate to at least 53 Republicans.

The Republicans managed this feat by securing a few hotly contested Senate races, as well as a few races that were leaning Democratic. For example, Ted Cruz eked out a victory past progressive challenger Beto O'Rourke. Similarly, Republican politicians Mike Braun and Kevin Cramer secured wins against Democratic Senators Joe Donnelly and Heidi Heitkamp in Indiana and North Dakota, respectively.

The rest of the night had its surprising and unsurprising moments. One such surprising moment: Andrew Gillum, the Democratic hopeful for the Florida gubernatorial race, conceded to conservative Ron DeSantis, after a hugely hyped race that pegged him as the likely winner.

On the other hand, the Democrats did exactly what they were predicted to do in the House: They took it back. By 10 p.m. ET on Tuesday evening, a dozen Democrats had flipped House seats, and another 20 were predicted to flip seats as well, based off of preliminary voting totals.

In addition to the changes in the House and Senate, there was another surprising number that came out of the midterms on Tuesday: 2018 marked the first time in United States history that the American people elected over 100 women to the House of Representatives.