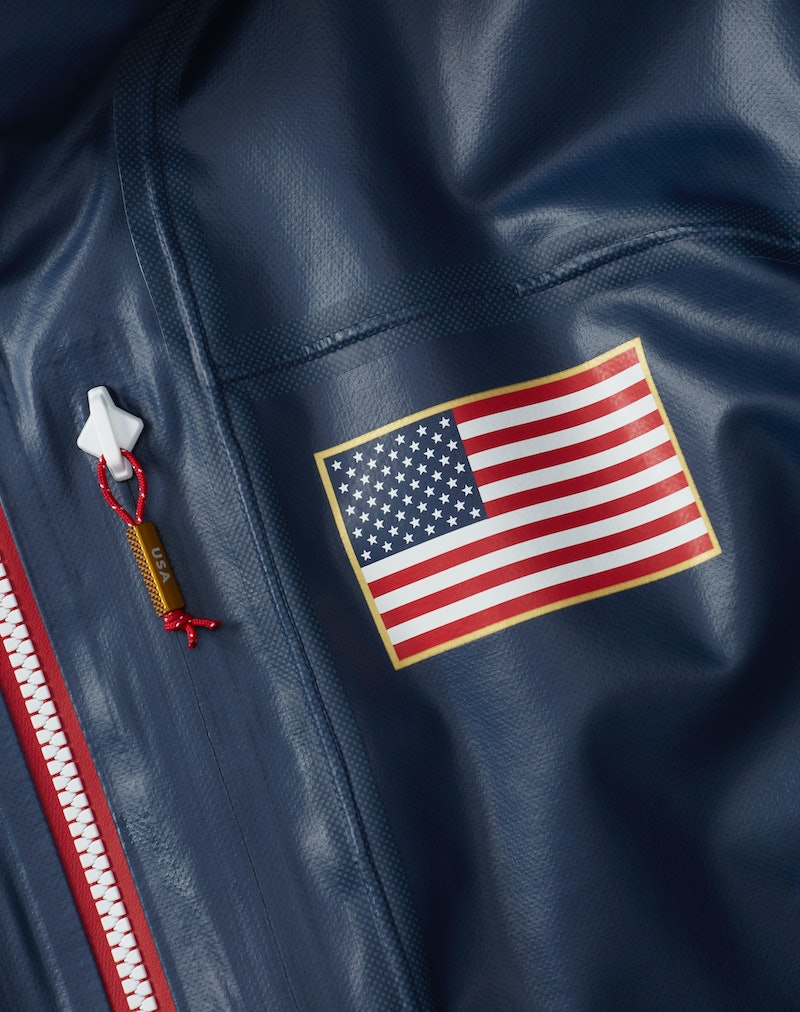 It doesn't take a sports fan to notice the outfits at the 2018 PyeongChang Olympics — or that two teams have eerily similar designs. The United States and Canada have similar Olympic Freestyle Skiing uniforms for one main reason — they were designed by the same brand. Columbia Sportwears, aka the people that make the fleece zip-ups, was in charge of designing the uniforms and they got so inspired by the design that they used it for both countries.

When it comes to Olympic uniforms, the key is to get the perfect balance of nostalgia, team spirit, and functionality. Apparently, the formula worked out the same for the US and Canada team — and Brazil and Ukraine and Kazakhstan and Belarus. The jacket and pant combos are all extremely similar, just in different colors and, obviously, with different team names.

At first glance, the US Freestyle Team's uniforms look like an average blue and white snow jacket, but it's all about the details. When you look closely, you can see a snow-printed pattern on them. If you look even closer, you can see that there are stars on the pants as well.

According to the press release, the jacket and the pants use a fabric called Omni-Heat Reflective that is "space blanket-like technology" used to keep athletes warm without needing a ton of layers. It's also, as you probably already guessed, water-proof.

The real reveal comes when the jackets get unzipped. The tops are — quite literally — lined with gold. The entire backing of the jacket is covered in the color as well as a seal-like design on the back. On top of saying "USA" the inside also reads "Climb To Glory." There's also an eagle, pyramids, and 1776 — the year the U.S. became an independent nation

That's a whole lot of imagery in one design. But there's also a lot of perks in the design. Along with being extremely warm, Columbia found a way to eliminate the need for zipper tape, making for the "lightest-weight waterproof zipper ever," according to the press release. All of this makes for a sleek design and doesn't weigh the athlete down.

Team Canada's uniforms are almost exactly the same as Team USA's. The colors are different, but all of the light-weight benefits are the same. So the team won't exactly have a leg-up on the competition with the design, but it's still pretty innovative.

This isn't the only uniform you'll see if you're watching the ski competition, either. According to CBS Sports, the Team Ski and Freestyle Ski are two different teams that will have two separate uniforms. Team Ski's uniforms were designed by Spyder. They follow a similar color scheme, but the brand chose not to incorporate gold into the design.

According to the press release, the Freestyle Ski Team worked with Columbia to come up with the uniform design. The Olympics won't be the first time that the team feels, wears, or tests out the uniforms, so they'll be completely comfortable with the design.

“It’s a unique opportunity to work closely with a brand and see your input come to fruition,” said Troy Murphy, a member of the U.S. Ski Team, in a press release. “We spend countless hours on the mountain in a wide variety of conditions. It’s awesome that we can give our feedback to Columbia and have them hand us a uniform the next season that reflects our input.”

Even if you're not interested in sports in the slightest, you'll want to watch to see Team USA's gears. Unfortunately, unlike other Olympic gear, you won't be able to buy these online after the event.