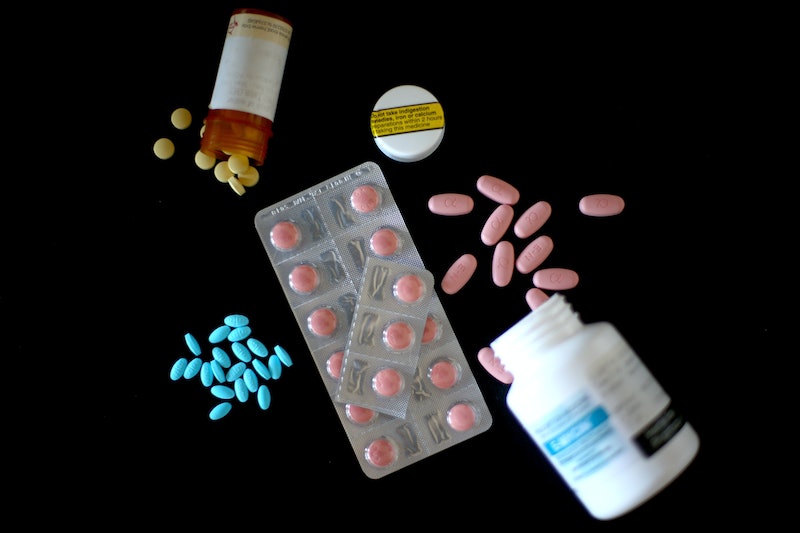 In August, President Donald Trump declared the country's opioid crisis a national emergency, though he still hasn't signed any of the official documents that would pressure Congress to begin allocating funding to combat the epidemic. As both public and private entities continue to grapple with how to best handle the epidemic, which according to the CDC claimed 33,000 American lives in 2015, one thing is becoming increasingly clear: The opioid crisis affects women — and specifically older women — more acutely than men.

According to a new report from QuintilesIMS Institute, 40 percent more women than men become "persistent" opioid users after surgery, with middle-aged women — ages 45-54 — suffering from the highest rates of opioid-related deaths among all women.

Part of the problem? According to the report, doctors are writing more opioid prescriptions for their post-surgery female patients, giving women in the 40-59 age range twice as many prescriptions as their male counterparts. As a result, these women often end up with an excess of pills long after their pain has subsided, leaving them vulnerable to developing an addictive relationship to the prescription medication.

"The most important thing [this report shows] is that nobody is immune to the risk of opiates," Dr. Paul Sethi, an orthopedic surgeon at Orthopaedic & Neurosurgery Specialists, tells Bustle. "It breaches socioeconomic, gender and racial barriers."

These aren't the first insights into how opioid addiction affects women in particular. According to an April report from the Connecticut Health Investigative Team (C-HIT), there are a few reasons women are more likely to develop an opioid addiction, the first having to do with women's relationship to pain.

C-HIT reports that some 50 percent of women in the United States suffer from chronic pain. And, because women are more likely than men to seek out medical treatment, they're more likely to be prescribed opioids and fall into addiction.

While middle-aged women aren't who many people imagine to be the face of the opioid crisis, the C-HIT report stated that they're well-positioned to coax doctors into writing them prescriptions for opiates, "even in damaging combinations." Patricia Rehmer, the senior vice president at Hartford HealthCare and president of the Behavioral Health Network, told C-HIT that this applies most specifically to middle-aged white women, whom she said were "pretty good doctor shoppers."

There's other research that suggests middle-aged Americans are at the forefront of the nation's epidemic. Though it didn't break down its findings by gender, an April Center for Disease Control and Prevention study reported that Americans in the 45-64 age range made up 44 percent of all overdose-related deaths in 2013 and 2014.

A story from the Orange County Register that same month brought those statistics into sharp relief: In it, a man named Austin Glass struggles with the death of his mother, 56-year-old Teri Sue, who died from an opioid overdose in 2016.

Sue had reportedly been prescribed the drugs following a series of some two dozen surgeries to treat her late-stage breast cancer. “She was a typical and amazing PTA kind of mom,” Glass told the Register. “She went to all of our events. She did everything she could to make sure we had good lives.”

The revelation that middle-aged women fall victim to opioid addiction at higher rates than men isn't a new one. But it's possible that Americans' inability to imagine a PTA mom like Sue developing a fatal addiction to opiates has rendered these women's suffering invisible.

What's more, Sethi says that QuintilesIMS Institute's recent study, along with other existing research on the topic and anecdotal evidence, only begins to scratch the surface of why women like Sue have become the opioid crisis' most likely victims. "Now that we're aware of it, we have to peel back the layers of the onion," Sethi adds.

Sethi explains that the medical community has an important role to play in stopping opioid addiction in its tracks, long before women are faced with these difficult circumstances. Part of that requires doctors to take a new approach to treating pain.

"[Doctors] are trained in the beginning of our careers to see pain as a vital sign, and told that if we don't treat pain as a critical vital sign we're remiss in our responsibility," Sethi says. "As a consequence, we've done what we've been trained to do — douse the problem with water."

Sethi says that "dousing the problem" usually involves prescribing pain-killing medication like opioids rather than taking a "multimodal" anesthetic approach, meaning doctors address pain registered by all of the bodies nervous systems and pathways. He'd like to see the medical community take steps toward making the latter approach more widely accepted and practiced.

"In surgery, that means the use of Tylenol and Ibuprofen, the use of long-lasting local anesthetics and a combination of non-opiate medications after surgery to look at the person from stem to stern," Sethi adds. "Is any of this new or groundbreaking or fancy? It shouldn't be. But there's not an agreement among physicians on how to administer multimodal care."

As doctors grapple with this question of how to best treat pain, Sethi says there are simple steps patients to reduce their risk of falling into addiction.

"In the same way that patients are going to ask their physicians, 'How many procedures have you done?' we want to empower patients to ask, 'What are the strategies you’re going to employ to manage my pain? What are my options?" Sethi says. "The goals here are to limit this one avenue into dependence."

While it's unclear how the federal government will address the opioid epidemic, part of that effort will likely start at the doctor's office. And for middle-aged women, that one step could make all the difference.