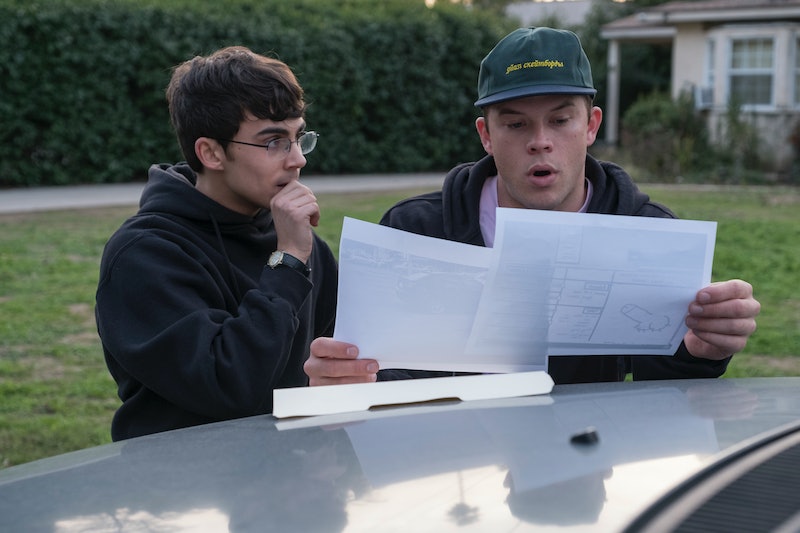 Netflix's American Vandal may be a true crime parody, but, surprisingly, it also doubles as a compelling whodunnit. Its execution is so on the nose that by the end of its eight-episode run, you find yourself genuinely wondering who drew the d*cks graffiti on American Vandal. And just like the documentaries that inspired it, the answer is remarkably complex. Somehow, a show centered around a juvenile high school prank manages to make its low-stakes premise incredibly suspenseful. Spoilers ahead for the finale of American Vandal Season 1.

The drama all starts when someone spray paints penises across 27 cars in the teachers' parking lot, causing upwards of $100,000 in damages. In the aftermath, attention immediately turns to Dylan Maxwell, a token slacker with a penchant for drawing d*cks on dry erase boards and any other open surfaces. There isn't much hard evidence, and Dylan insists it wasn't him, but his reputation does him in. All it takes is a flimsy alibi, a willing witness, and a known vendetta against one of the affected teachers to land him with a slapdash expulsion. AV geek Peter Maldonado, however, isn't convinced, and he sets out on a crusade to exonerate Dylan and film the process.

Ludicrous as it is, what ensues is a series that masterfully spoofs true crime touchstones. The footage feels shaky but immediate, often rushing to follow an on-the-move subject or dipping to hide the camera while key audio plays on. There are also elaborate crime boards pieced together with evidence and theories (and string), and Peter's narration is delivered with deadpan precision. It's near-impossible to forget the absurdity of the plot, but you still find yourself wanting justice and truth: Is Dylan lying, or is the real vandal still on the loose?

In the final episode, Peter manages to find some concrete proof that Dylan wasn't at the school when the graffiti took place, and it's enough to clear his name and get him reinstated at school. Then, a last-minute crack in the case points him in the direction of another potential suspect: Christa Carlyle, student body president, social activist, and school exemplar. When a kid collapses while drinking at an after-prom party, everyone starts calling for someone who knows CPR — including Christa, whose original alibi said she was getting her CPR certification when the graffiti occurred. Unless she was too panicked to remember her training, this incident suggests that her alibi was a lie.

Peter then re-teams with his best friend and co-producer, Sam, to chase the lead. He calls the camp where Christa supposedly received her certification and finds out the instructor listed on her paperwork is Van Delorey, her boyfriend. Peter and Sam then realize that Christa had a broken leg at the time of the graffiti and wouldn't have been able to move quickly enough to hit all 27 cars without getting caught. They then theorize that Van was her accomplice: She erased the security tapes while he drew the penises. Both Van and Dylan are 5-foot-10, caucasian males with wide builds. If Alex Trimboli, the witness who claimed to have seen Dylan at the scene of the crime, hadn't gotten a good enough look, he could've easily mistaken Van for Dylan.

So why would Christa, a beloved, straight-A student, mastermind such a crude and childish prank? Dylan ties it back to when she tried out for the football team, causing tension with Coach Rafferty. In a video, Christa can be seen being tackled by a much larger player, but she was trying out for kicker, so there was no reason to put her in a hitting drill. Afterward, Rafferty is shown hissing something at Christa that makes her visibly uncomfortable, causing Peter to wonder if Rafferty did it just to spite her.

Peter then finds out that Christa filed a complaint against Rafferty on the day of tryouts. It sat untouched for six months before finally being marked resolved — one day before Rafferty accepted the teacher of the year award (without being reprimanded), and five days before the graffiti. Also of note? Christa actively protested Dylan's expulsion, handing out "Free Dylan" T-shirts and starting a Go Fund Me campaign. "Were those protests of passion for Christa, or an attempt to clear her guilty conscience?" Peter wonders.

He decides to reach out to Christa to ask some follow-up questions, but she refuses to meet with him until the day after graduation. When she does finally agree, she says she'd rather not talk about what happened with Rafferty, and denies taking part in the graffiti. Peter is still suspicious, but he's reluctant to say she's guilty, given the circumstantial evidence. "While I do owe you my honest, best theory, I'm hesitant to speak with any certainty," he says, "because I've seen the way an accusation can ruin someone's life."

In the end, the vandal is never officially caught, but Christa's entanglement — and the uncertainty that follows — is precisely the kind of twist that makes true crime storytelling captivating. And if you're reading this, it hooked you, too. Now, let's all go back and look for clues as to who did it, and if Peter's theory proves correct.