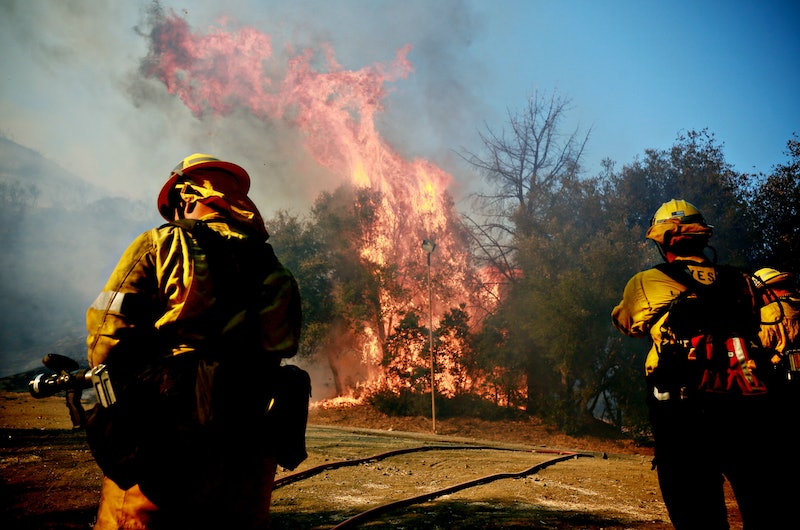 California is once again engulfed in flames. The latest wave of wildfires has burned 248,322 acres in the Golden State and killed at least 82 people, according to CBS News and Cal Fire. An additional 699 people are reported missing as well, and although rain later in the week will help extinguish the blazes, the fires aren't expected to be fully contained until Nov. 30. All of this chaos may have you wondering just who is fighting the California wildfires.

In fact, a wide variety of folks are helping extinguish the blazes in the Golden State. Of course, many of them are state and local firefighters, but they aren't the only ones. Hundreds of firefighters from out of state have come to California from across the country to combat the fires as well, according to Denver7.

In addition, around 1,500 inmates are fighting the California fires through the Conservation Camp Program, in which prisoners are given the opportunity to fight fires, floods and other natural disasters during their incarceration. Inmates who qualify for this program — that is, those who aren't in prison on rape, arson or sex offense convictions — do so on a volunteer basis, and they receive time off of their sentences for their work. As of 2017, there were around 250 women inmates fighting California fires, according to the New York Times.

Nevertheless, California's use of prisoners to extinguish the fires has proven enormously controversial. For one, the inmates are paid next to nothing for their work — $2 per day plus an additional $1 per hour while fighting an active fire. Moreover, many of them are unable to find work as firefighters after their release, thanks to occupational licensing laws that often block those with criminal convictions from obtaining certain jobs.

Also controversial is the use of private wildfire defense contractors to combat the blazes. These firefighters are employed not by the government, but by for-profit companies that are hired by insurance agencies — or in some cases, rich individuals — to fight the fires in question. TMZ reported, for example, that Kanye West and Kim Kardashian hired private firefighters to save their $60 million home during the recent blazes.

Characterized by some as "firefighters for the rich and famous," private fire defense contractors have been depicted as a bleak example of economic inequality and capitalism run amok. They've also been criticized by government officials for interfering with the efforts of state and local firefighters.

But the president of one such contractor, Wildfire Defense Systems, tells WBUR that 90 percent of the homes his firefighters serve are "of average value" — and according to TMZ, the private firefighters hired by West and Kardashian also helped extinguish blazes that threatened several of their neighbors' homes.

Unfortunately, California needs as much help as it can get to put put out the fires. According to CBS News, California has suffered five of the 10 most destructive blazes in the state's history in the last 13 months alone. Although climate change is not the only culprit, it has exacerbated the state's existing fire risks, and the most recent spate of fires will not be the last.