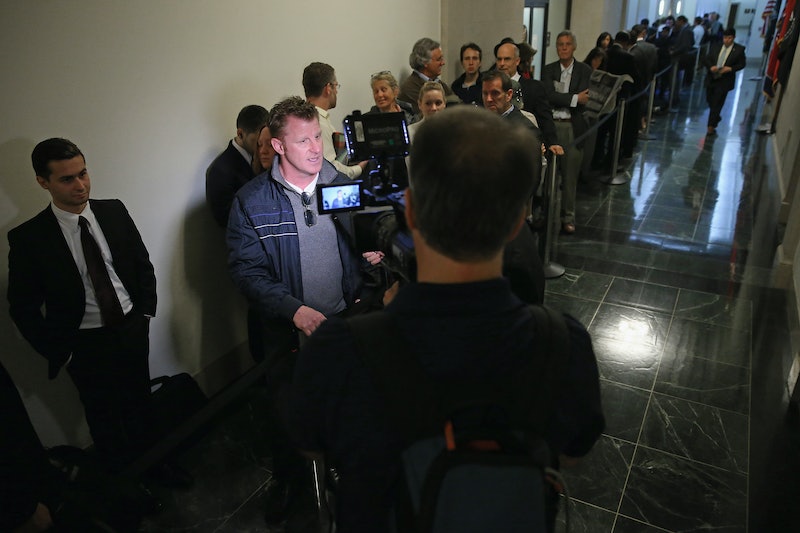 In a tweet on Feb. 13, Alexandria Ocasio-Cortez highlighted something you probably didn't know about who gets to sit in on congressional hearings. The freshman Congress member tweeted a picture of people who were all waiting in line outside of the room for an upcoming committee hearing — but those people aren't actually going to the meeting, she explained. According to her, they're simply being paid to hold the spot for a lobbyist until the hearing starts.

Shock doesn’t begin to cover it.

Today I left a hearing on homelessness & saw tons of people camped outside committee.

I turned to my staff and asked if it was a demonstration.

"No," they said. "Lobbyists pay the homeless + others to hold their place so they can get in 1st."

Apparently this is a normal practice, and people don’t bat an eye.

The first few people in line are guaranteed a seat in a given hearing. This was the hearing for marijuana banking laws.

Lobbyists and those who can afford it pay people to hold their spot so they get in 1st.

According to The Hill, hiring people to wait in line and therefore hold seats for hearings is a common practice in D.C. Additionally, a 2009 article from CNN confirms that the practice of homeless people standing in for lobbyists has happened in the past. The network reported that some of the "contracted" individuals would get in line as early as midnight before a hearing to ensure they'd get an available seat for their "client."

Via the news network at the time, line-waiters could stand for up to 30 hours for especially big hearings with limited availability, and were paid anywhere from $11-$35 an hour for their work. One of the individuals participating said to CNN, "Sitting in the halls of Congress made me feel a little better. It elevated me and made me feel like, well, you know, maybe I do belong here, maybe I can contribute even at that little minute level."

Another "contractor" said to the news network, "I'm a part of something today and I'm very happy about that."

However, it's not just about the people who are paid to wait in line by lobbyists — it's about the other ones who can't do so, such as activists full-time workers. Kalen Pruss, a fellow at the internet environmental group avaaz.org, said to CNN in 2009, "It's very unfortunate that the people who come here to line-stand always beat us here cause they can stand here all night."

Dan Riffle, Ocasio-Cortez's senior adviser, tweeted further insight on the situation on Feb. 13: "The pieces of paper on the floor are the names of the lobbyists whose place they’re holding. This dude, for example, lobbies for a company called Canndescent ($360,000) and the Nat’l Cannabis Industry Assocation ($120,000)."

So the people who are getting into the hearing on marijuana banking laws are marijuana lobbyists, according to Ocasio-Cortez and Riffle.

As The Washington Post notes, it is now illegal for members of the Supreme Court Bar (which can be any lawyer who pays the $200 entry fee) to pay other people to wait in line for them before big hearings at the Supreme Court. There is currently no law that prohibits this act for congressional hearings.