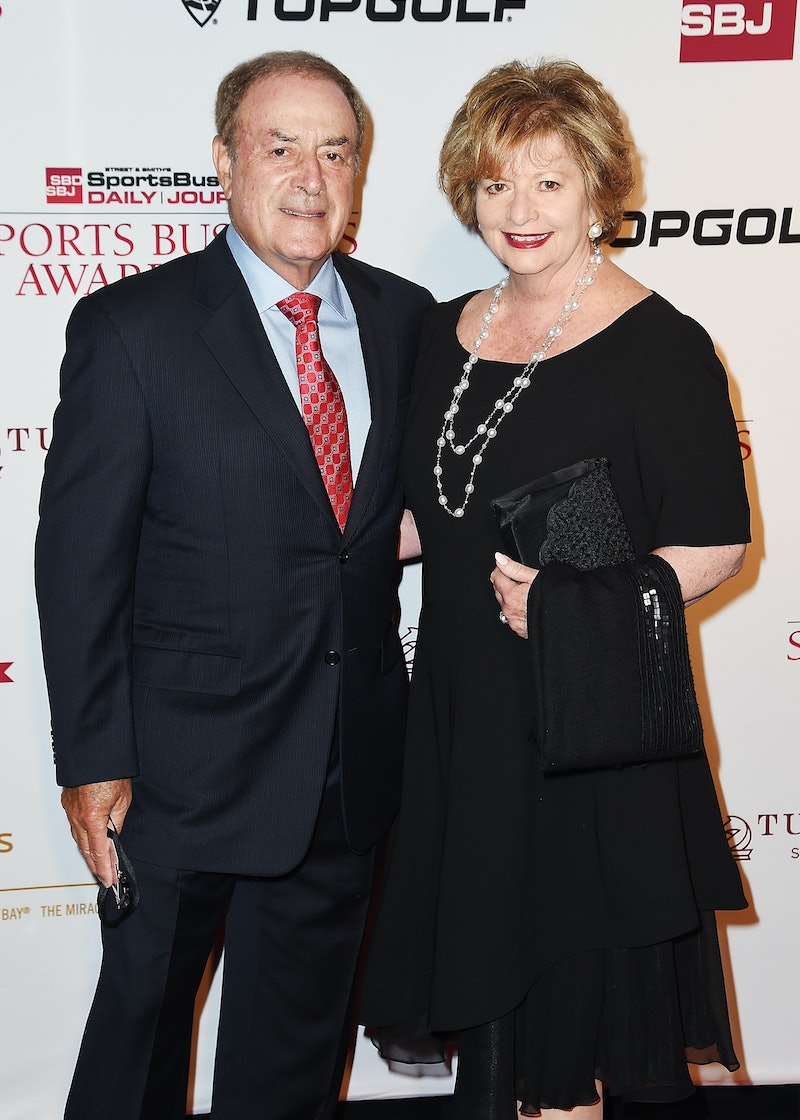 The two best football teams on Earth are squaring off for a chance to win an NFL championship at Super Bowl 2018 on Sunday. It also means that you're going to be spending a few hours with the Super Bowl broadcasters ― assuming you watch the game with the sound turned on ― so why not get more familiar with them before the game starts? For example, did you know that Al Michaels and his wife, Linda Anne Stamaton, have known each other for more than 50 years?

It's true, and it's an element of the couple's life that's gotten some attention from the press in recent years. Al described their meeting, at age 15, to Sports Illustrated in 2014. When Michaels was asked who knew him best, he answered that it was Linda, and called his relationship with her "the biggest piece of luck" he'd received in his life.

Linda and I met in the 10th grade so we have known each other since we were 15. She is the love of my life. She is just the greatest. That is the biggest piece of luck that ever came down the pike for me.

Linda reportedly attended Hamilton High School in Los Angeles, which was where she met Al. She ultimately ended up working in television for Chuck Barris, perhaps best known as the host of The Gong Show, and the creator of both The Dating Game and The Newlywed Game.

Linda also reportedly shares a very particular sports fandom with her husband, as well as countless residents of Los Angeles. Namely, she and Al are fans of the Los Angeles Kings hockey team, and reportedly attended the franchise's very first game all the way back in 1967.

Perhaps the most famous moment in Al's early career came during the 1980 Olympics, when the U.S. hockey team defeated the overwhelming favorite Soviet Union team in what would eventually be known as the "Miracle On Ice." Describing the aftermath of the game to SI, Al noted that he and Linda ended up with an interesting memento.

My wife Linda was out on the street that Saturday (the day after the Miracle on Ice game) and wound up buying a painting of the U.S. playing the Soviets. She comes back to show me and says, “Look at this. They have already painted a scene from last night’s game!” I said, “Honey, they are wearing the wrong uniforms. This is from some previous U.S.-Soviet game at a previous Olympics. We got duped.

As the Sports Illustrated interview also noted, the pair were also friends of O.J. Simpson and his ex-wife Nicole Brown, and were badly shocked by Brown's death and Simpson's subsequent murder trial. According to reports following Brown's death, Al and Linda drove past the site of the grisly killing, Brown's Los Angeles condo, and stopped to say a prayer.

"This whole thing has played out so crazily and publicly, there's been no time to mourn,'' Al said, describing the scene. ''We stopped the car and said a prayer. It was the first time we had a chance to think about Nicole and the kids."

According to Al, Linda frequently dined with Brown and Simpson prior to the killings; Simpson was eventually acquitted of murder.

In short, Linda and Al have been together for decades, and have two children, Steven and Jennifer Michaels Cohn. The pair were married in 1966, approximately 10 years before Al's decades-long stint as an ABC Sports broadcaster. To put it another way, they were married before the first-ever Super Bowl was even played.