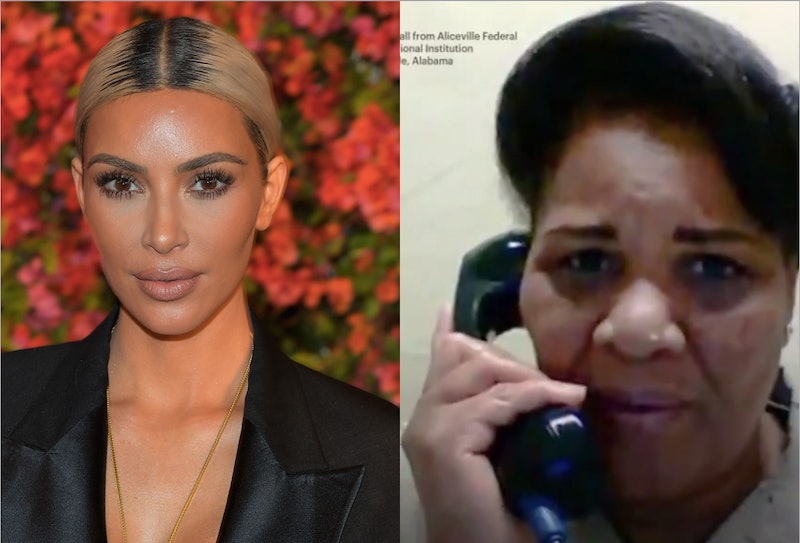 Charley Gallay/Getty Images for Bumble; Mic/Twitter
By Seth Millstein
May 3, 2018

It's rare that you hear Kim Kardashian mentioned in the same breath as Jared Kushner and Ivanka Trump. According to Business Insider, however, Kardashian has been in talks with President Trump's daughter and son-in-law in an attempt to secure the release of Alice Marie Johnson, a 62-year-old grandmother who has spent the last two decades in prison for a nonviolent drug offense.

"Before my incarceration, I had a full life," Johnson wrote in an op-ed at CNN Thursday. "I married my childhood sweetheart and became the mother to five beautiful children. As the years went on I became a facilitator training people on how to be managers. I was a manager at FedEx for seven years. Life for a time was good."

However, a series of hardships soon threw Johnson's life into disarray. In 1989, she and her husband divorced. A year later, she says lost her job at FedEx, ultimately filing for bankruptcy and losing her house in the process. Then, in 1992, her youngest son was killed in a scooter accident.

At that point, Johnson gradually became involved in a drug trafficking operation in Memphis, Tennessee. She says that she never brokered any deals or handled drugs, but was responsible for relaying coded messages over the phone.

"I acknowledge that I have done wrong," Johnson wrote in her op-ed. "I made the biggest mistake of my life to make ends meet and got involved with people selling drugs."

In 1993, Johnson and 15 others were arrested on various drug charges. During the trial, 10 of Johnson's co-defendants testified against her, and received sentences ranging from no jail time to 10 years in prison in exchange, according to Mic. Johnson, however, was granted no such leniency, and despite having no previous drug charges, was sentenced to life in prison in 1997.

Johnson appealed to President Barack Obama for clemency three times, according to Business Insider. But although Obama did grant clemency to many nonviolent drug offenders during his presidency, his administration rejected Johnson's case all three times.

In October, however, Johnson found an unlikely ally in Kardashian. After stumbling upon a Mic video about Johnson's case, Kardashian expressed sympathy on Twitter, tweeting to her 59 million followers that Johnson's sentence was "so unfair."

She didn't stop there. A month later, Kardashian hired celebrity attorney Shawn Holley, a former member of O.J. Simpson's legal team, to advance Johnson's case. Then on Tuesday, TMZ reported that Kardashian has been in talks with Trump and Kushner, the latter of whom is a vocal proponent of criminal sentencing reform, for months about Johnson's incarceration. Kardashian reportedly lobbied the couple to try and convince President Trump to pardon Johnson, and sources told TMZ that Johnson's file is now on the president's desk.

In a letter obtained by TMZ, Johnson thanked Kardashian profusely for her efforts. "There are no words strong enough to express my deep and heartfelt gratitude," Johnson wrote. "Ms. Kardashian, you are quite literally helping to save my life and restore me to my family. I was drowning and you have thrown me a life jacket, and given me hope that this Life jacket I'm serving may one day be taken off."

The ACLU has also taken up Johnson's case, and she was featured prominently in the organization's campaign to end mass incarceration and life sentences for nonviolent offenders. In addition, Can Do Clemency placed Johnson at the top of a list of the top 25 incarcerated women who deserve clemency.

"Trump has the power to give me a second chance," Johnson wrote in her op-ed. "He truly has the power to change our justice system for the better. I can only continue to be steadfast and hope that he hears me."

More like this
Police Shove 'Full House' Star Jodie Sweetin At An Abortion Rights Protest
By Radhika Menon
Where Is Oscar Torres In 'Only Murders In The Building' Season 2?
By El Hunt
Every Single Big & Small Way You Can Fight For Abortion Rights
By Tess Garcia
5 Ways To Stand In Solidarity With Women In America From The UK
By Sophie McEvoy
Get Even More From Bustle — Sign Up For The Newsletter