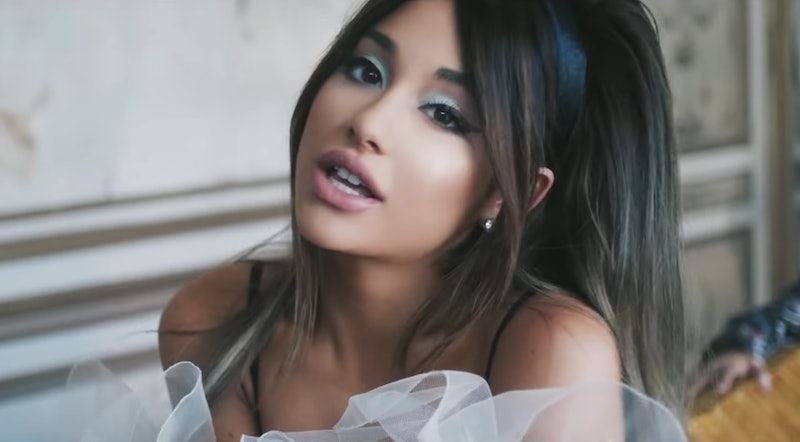 Ariana Grande keeps blessing fans with content, and, honestly, no one is complaining. Late Thursday night, she dropped her newest song, "Boyfriend," a collaboration with duo Social House. Both the track and the video are all about jealousy-fueled chaos, but who is Ariana Grande's "Boyfriend" about? The singer is known for getting personal in her music, even naming her exes in "Thank U, Next," so it's no wonder fans are wondering if there's a specific man who influenced her newest track. However, it looks like this time, that might not be the case.

"Boyfriend" captures a universal theme about relationships, without necessarily focusing in on just one. On the heels of the track’s release, Grande took to social media to reflect on the song’s meaning. “[I] feel like this song captures a common theme in the lives of so many people i know,” Grande tweeted on Thursday after a fan asked what inspired the song. “people want to feel love but don’t want to define their relationship & have trouble fully committing or trusting or allowing themselves to fully love someone. even tho they want to.”

She later followed up with another tweet: “we wanted to make something uplifting that captures that feeling of being afraid to take the leap & trust, being afraid of being hurt or feeling like you won’t be enough for that person ... but also how it feels to have a crippling crush on someone.”

The lyrics to “Boyfriend” certainly offer an authentic perspective on the trials and tribulations of romantic relationships. As mentioned in Grande’s tweet, the track examines the all too relatable conflict of wanting to be in love, but feeling afraid to fully commit and be completely vulnerable with another person.

In the “Boyfriend” chorus, the “Thank U, Next” singer croons the following lyrics, "You ain't my boyfriend / And I ain't your girlfriend / But you don't want me to see nobody else / And I don't want you to see nobody."

“Boyfriend” comes on the heels of her fan-acclaimed track “Break Up With Your Girlfriend, I’m Bored,” which Grande released back in January. At the time of the song’s release, Grande stans took to social media to speculate that the track was about ex Big Sean, whose relationship with Jhené Aiko was rumored to be on the rocks at the time. However, a twist at the end of the music video that suggest the song has an unexpected meaning: The "Break Up With Your Girlfriend, I'm Bored" music video — which starred Riverdale’s Charles Melton and his impeccable jawline — concluded with the singer coming face-to-face with her doppelgänger. In turn, fans theorized that the track was about self-love the entire time and not so much about a specific person in her life.

The same conclusion can therefore be drawn about “Boyfriend" — that, ultimately, the song isn't about anyone in particular, but rather the universal anxieties we all face in our romantic relationships. It can be hard to let someone into your life, and, like it or not, jealousy is a universal emotion, which makes "Boyfriend" one of Grande's most relatable songs yet.

More like this
Kanye West Apologizes To Kim K "For Any Stress I Have Caused" In Rare Interview
By Jake Viswanath
Adam Levine Denies Having An Affair — But Admits He “Crossed The Line”
By Jake Viswanath and Radhika Menon
Twitter Is Freaking Out Over Rihanna’s 2023 Super Bowl Halftime Show Announcement
By Stephanie Topacio Long
Everything To Know About Taylor Swift’s 10th Studio Album, 'Midnights'
By Grace Wehniainen and Jake Viswanath
Get Even More From Bustle — Sign Up For The Newsletter