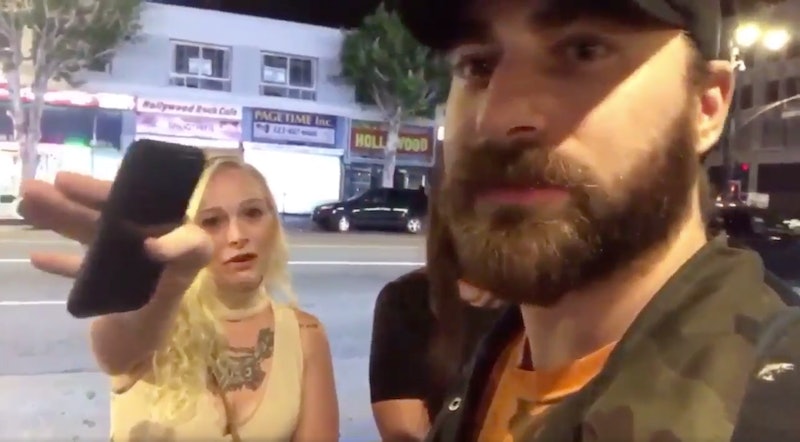 In perhaps the most satisfying thing you'll see on the internet today, alt-righter Tim Gionet, aka "Baked Alaska," to those familiar with his online persona, reportedly attempted to harass a group of women outside of a club and got shut down when he tried to put his phone in their faces. One of the women then proceeds to break his "brand-new iPhone 7."

In the video posted by Vic Berger on Twitter, Gionet is seen approaching three women outside of a club and starts filming them without their permission. When he's recognized by one of the women, Gionet denies that he's a white supremacist, even though he admits that he attended the Charlottesville rally "for free speech."

When one of the women tells him repeatedly that she doesn't want to be on camera and pushes his phone away, Gionet says, "You can't touch my property or me," stating that he's on a public street, and so he can film whatever he wants. She then swats the phone out of his hand when he refuses to stop filming her, and he complains that she broke his phone. "Not my problem," she replies, eventually entering the club with her friends.

Who Is "Baked Alaska"?

No stranger to controversy or offensive tweets, Gionet has tweeted out a meme of the 14 Words, a white supremacist slogan about preserving the white race. He has also been banned from Twitter for a week after photoshopping an image of Laura Loomer, a Jewish member of the alt-right, into a gas chamber meme.

The 29-year-old former rapper used to work for BuzzFeed, identified as libertarian, and supported the Black Lives Matter movement before becoming a Donald Trump supporter shortly before the election, according to Business Insider. His now-infamous nickname "Baked Alaska" was given to him by his boss when he was interning for Warped Tour as a social media intern — he was born in Alaska.

He told Business Insider that it was the "politically correct" atmosphere of working at BuzzFeed that drove him to align his beliefs with Trump's. "I was talking about the new Justin Bieber album," he said. "And I was like, 'Dude, that new Justin Bieber album is dope. I have to admit, I love Justin Bieber. He is totally my spirit animal.' And someone came up to me and was like, 'Hey bro, you can't say spirit animal, that's culturally appropriating Native American culture and that's not cool.'"

While BuzzFeed has not directly commented on Gionet or his interview, the website has published stories about Gionet and an article about banning alt-right members from companies refers to Gionet as a "former BuzzFeed employee."

There Was A Second Video, Too

In a second video posted by Berger, Gionet gets shut down again, this time by the general manager of the club who refuses to help him identify the women who reportedly broke his phone to the police.

"No. I don't want to do that for you," the general manager of Playhouse Night Club in Hollywood says. "If you're video taping in someone's face, and they tell you get out of their face, then it is what it is," When Gionet responds that it was technically legal, the manager says, "Oh, 100 percent, but you have to live with the consequences of what could happen."

"Also I don't believe you can video tape just anyone. Just my opinion. If you did that to me, I would do it too," she said. The general manager then proceeds to own Gionet with his tactics, standing incredibly close to his face and making him look visibly uncomfortable when he tries to leave. "Am I making you uncomfortable standing in your face? It's not illegal. It's so weird to invade people's privacy and their private space! But not against the law!" she added.

This is not the first time Gionet has gotten into hot water while trying to stream something on his phone. Earlier in August at the Charlottesville rally, Gionet was reportedly maced by unknown assailants (though people suspect that Gionet pepper sprayed himself). Gionet then instructs fellow alt-righter "Millennial Matt" to keep live streaming and that he "needs more milk!" Gionet then asks, "What are my people saying?"

Editor's note: The videos in Vic Berger's tweets were removed. They have since been replaced with the same videos from a different source, MilkLeaks.