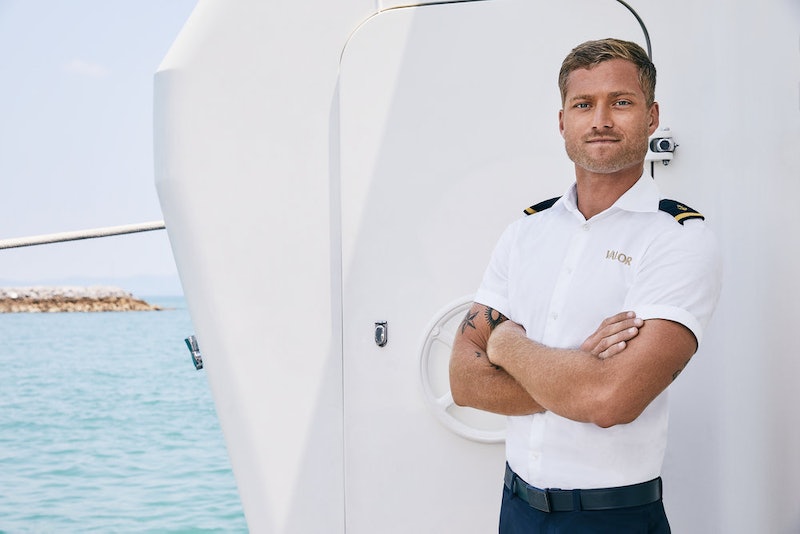 Below Deck returns for Season 7 on Monday, and though fans will see a few returning faces in Captain Lee Rosbach and Chief Stew Kate Chastain, that also means a new set of crew members. One of the biggest additions to the cast is Below Deck's Brian De Saint Pern, who will serve as the lead deckhand. And given his experience and strong passion for the industry, it's easy to see how he landed the job.

According to Brian's Bravo bio, he grew up in Bluff, South Africa, a coastal town where he surfed, swam, and played water polo, leading him to develop "a love for the water" from a young age. He didn't get into yachting until four years ago, but has been a "natural fit" at sea, and has been working aboard yachts in the Mediterranean. His next goal is to become certified as a First Mate/Officer on a charter yacht.

Deckhand abilities aside, Brian impressed both Captain Lee and Kate... when he took his shirt off. During a September appearance on People TV's Reality Check, Kate dished on the new additions to the cast. Wait 'til you see these guys, they're so hot, their bodies. There's one deckhand, Brian. He looks like Wolverine with his shirt off. Even Captain Lee one night was like, 'Did you see Brian with his shirt off?'" she teased.

But don't be fooled — Brian is a lot more than a great set of abs. Here's what else you should know about him.

He Has A Daughter

Per Brian's Bravo bio, he has a 5-year-old daughter named Micah who is "the light in his life and his main motivation for working so hard." On Sept. 14, Brian posted a photo of Micah and wrote "Even though I am not with you for long periods of time, just know that there is not a day that goes by where I don't think about you my little Rock star."

He Yachts All Year Round

Whether there's a camera crew around or not, Brian is all about that deckhand life, and often shares Instagram pictures with his crewmates from other charters. However, yachting 24/7 isn't always as fun as it may sound. "GOING ON LEAVE. Day has finally come... 128 days with no days off. [Definitely] the most mentally challenging seasons I've had," he captioned an Instagram photo in September.

He Has A Positive Attitude

Even with his packed schedule, Brian prioritizes having a positive attitude. "Just smile and roll with the punches, it could always be worse. Have a magic day ALL... One Love #positivevibes #positivity #justsaying," he captioned another Insta photo, this one with "Keep calm and just smile" written across the image.

Aside from the physical demands of maintaining a yacht, Brian stays active in other ways, like paddleboarding. When he's on land, he likes to skateboard and lift weights in the gym.

He's Excited To Be On Below Deck

See what he's been hyping up when Below Deck premieres Oct. 7.

More like this
Yes, You Can Really Charter Below Deck Med’s New Superyacht, Home
By Brad Witter
What That Ominous 'Selling Sunset' Season 5 Finale Could Mean For Season 6
By Orla Pentelow and Brad Witter
Pete Davidson Pops Up In This Hidden Scene From The Kardashians Season Finale
By Jake Viswanath
Everything We Could Expect In Gabby & Rachel’s Season Of The Bachelorette
By Kadin Burnett
Get Even More From Bustle — Sign Up For The Newsletter