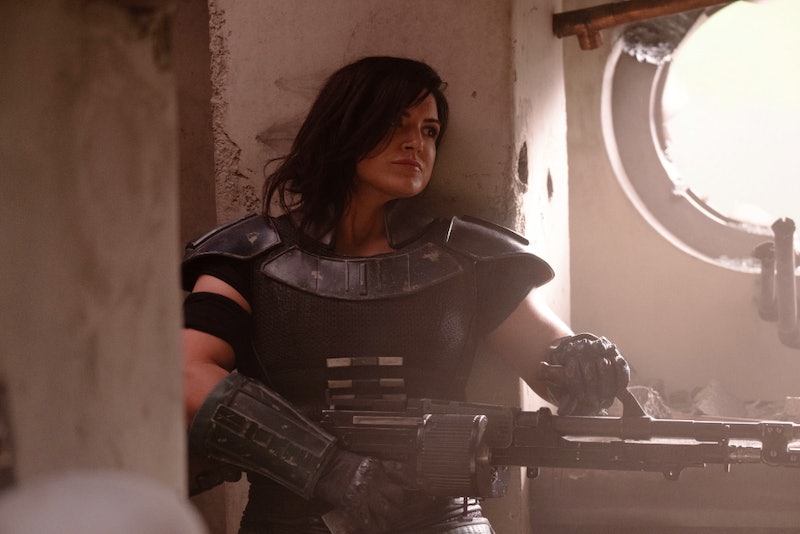 Among the many new characters in Disney+'s The Mandalorian is Cara Dune (Gina Carano), who serves as a pivotal part of the story despite the fact that she's never appeared in the Star Wars franchise. Details about the new series have been somewhat scarce, but Cara has been described by Entertainment Weekly as a former Shock Trooper turned mercenary who "fought in the Galactic Civil War under the banner of the Rebellion." According to Carano, however, Cara feels a little lost now that the Empire has fallen and the war is over.

"She just really loves the adrenaline of the war, so when that all dies down, she's kind of stuck," the actress told Us Weekly earlier this month. "All the excitement's gone, so she goes out from the outer realm. She does little hustling jobs for money, and she's a loner. She keeps to herself, she doesn't really trust anyone."

Sticking to herself, though, won't last long once she comes face to face with the show's titular Mandalorian, a bounty hunter played by Pedro Pascal. Carano didn't say much about how the two encounter one another, but teased to Us Weekly that it's a "really great first meeting," and that she thinks "people will truly enjoy their dynamic."

Speaking to Entertainment Weekly, she was slightly more forthcoming. "[Cara] runs into the Mandalorian on one of these planets that she's hiding out on and thinks that he's there to take her in and then their relationship escalates from there," Carano explained.

But while Carano has been pretty tight-lipped about her character, she's had more than enough to say about her co-star. "[Pascal is] just an absolute favorite," she told Us Weekly. "He really stands out in this quiet confidence that he has onscreen, and when you meet him offscreen, he is so goofy and so fun and has the heart of a child. He's an incredible actor.”

Whether Cara and the Mandalorian wind up as friends or foes remains unclear, but given Carano's background in mixed martial arts, she's definitely someone you won't want to mess with, regardless of which galaxy (or which side) you come from.