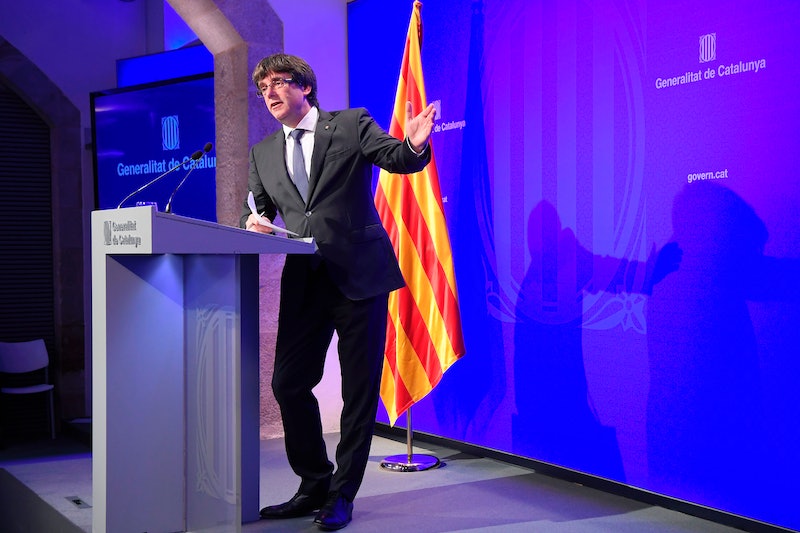 On Thursday, Spain's high court ordered the Catalonian government to cancel a planned Monday meeting at which Carles Puigdemont, the president of Catalonia, was expected to formally announce the region's independence from Spain. Tensions between the Spanish government and the autonomous Catalonia region have been steadily escalating ever since Sunday, when Catalonians held a referendum on secession in defiance of orders from Spanish authorities in Madrid.

Although the Catalonia independence movement has been percolating since long before Puigdemont took power, he's been accelerating the drive for independence ever since ascending to the Catalonian presidency less than a year ago and is a major force behind the steadily-developing crisis.

Puigdemont's presidency is largely a fluke. In the region's 2015 elections, his party, CUP, struck a deal with the Together for Yes coalition in order to secure a slim majority of seats in the Catalan parliament. In exchange for CUP's support, former Together for Yes leader Artur Mas agreed to step down, as he had previously been linked to unrelated corruption scandals. Puigdemont was picked as his replacement.

In September, Puigdemont helped push a law through the region's parliament that called for a referendum on secession in October — and when the Spanish court declared that such a referendum would be illegal, he vowed to hold it anyway, and did.

This prompted a violent crackdown by Spanish authorities, who smashed their way into polling places and in some cases fired rubber bullets at voters. In the end, over 800 people were injured in clashes with police, but Catalonians — or rather, the 42 percent of Catalonians who voted — overwhelmingly approved the referendum, with 90 percent voting to secede from Spain.

But the Spanish government hasn't accepted the legitimacy of the vote. Spanish Prime Minister Mariano Rajoy denounced the "unilateral declaration of independence," arguing that it will result in "greater evils" and demanded that Catalonia "return to legality." The chief of Catalan police, Josep Lluís Trapero, has been summoned to appear before the Spanish high court on charges of sedition, and Spain's King gave a rare televised address to condemn the referendum.

"With their decisions, [referendum organizers] have systematically undermined the rules approved legally and legitimately, showing an unacceptable disloyalty towards the powers of the state," King Felipe said Tuesday. "Those authorities have underestimated the fondness and feelings of solidarity that have united and will unite the whole of the Spanish population, and with their irresponsible attitude they have put the economic and social stability of Catalonia and Spain at risk."

But Puigdemont didn't budge, announcing on Wednesday that Catalonia would formally declare independence "in a matter of days."

The Catalonian president was expected to formally declare secession at Monday's parliamentary session; now, though, it's unclear whether that meeting will take place. The speaker of the Catalonia parliament said that she and her fellow legislators are "considering what to do" in light of the court's ruling, which she called "an unusual and extremely serious event in a democratic Parliament." Puigdemont told CNN that the decision of whether to hold the session isn't his to make, but strongly denounced the Spanish court's ruling.

"The Constitutional Court has no right to impede a democratic parliament session, which by law is inviolable," Puigdemont said.

Where the crisis goes from here is anybody's guess. It's possible that the Spanish government will invoke the so-called "nuclear option" — that is, dissolving the Catalonian parliament entirely and triggering new regional elections. Although the Spanish government has the power to do this under its Constitution, it would almost certainly be perceived as an authoritarian and repressive move, especially given that Spain was a dictatorship less than 50 years ago.

The speaker of Catalonia's parliament, Carme Forcadell, didn't say which way she was leaning with regard to the planned Monday session, but called the court's decision a "violation of freedom of free speech."