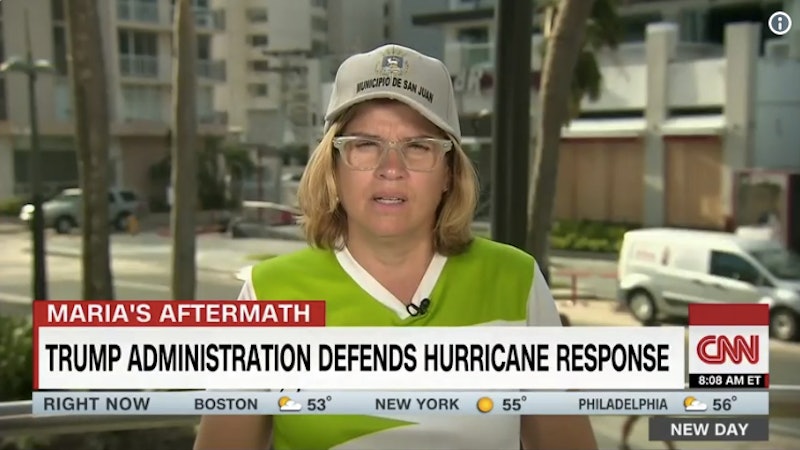 As residents in Puerto Rico are left without food, clean water, and power in the days after Hurricane Maria ravaged the U.S. territory, mounting criticism has pointed to the Trump administration for not doing enough to help the island. On Thursday, Department of Homeland Security Secretary Elaine Duke said that she was “very satisfied” with the federal relief efforts. She even went on to call the efforts a "good news story," leading San Juan Mayor Carmen Yulín Cruz to slam the comments by the Trump administration on Friday and to say that the devastation in Puerto Rico is "not a good news story."

“I know it is really a good news story in terms of our ability to reach people and the limited number of deaths that have taken place in such a devastating hurricane,” Duke told reporters on Thursday.

I would ask you come down here and visit the town and then make a statement like that, which frankly is an irresponsible statement and is a contrast to the statements of support I've been getting since yesterday when I got that call from the White House. Goddammit, this isn't a good news story. This is a people are dying story. This is a life or death story. There is a truckload of stuff that can't be taken to people story. This is a story of devastation that continues to worse because people aren't getting food or water.

Cruz was elected mayor of San Juan in 2012 and is the third woman to hold San Juan's mayoral office. In an interview with CBS on Tuesday, Cruz explained the desperate situation in Puerto Rico and asked for more help from the federal government.

Cruz also indirectly slammed Trump for tweeting about Puerto Rico's debt. “Texas [and] Florida are doing great but Puerto Rico, which was already suffering from broken infrastructure [and] massive debt, is in deep trouble,” Trump wrote on Twitter on Monday.

"People died yesterday because there was no diesel," Cruz said. "I don't know how else to scream and shout and say it. This is the time for action. Let's not talk about the debt. The freaking debt. Let's talk about the deaths that will happen if things don't get into people's hands."

Cruz has also told CNN that the aid that was eventually deployed "is making people feel like we're not alone and we can make it" and that "FEMA people have been wonderful."

Cruz's comments about the Federal Emergency Management Agency, the organization that handles relief efforts, immediately drew the attention of President Trump, who tweeted on Tuesday that "we are working hard" and "much food and water there/on way."

President Trump faced backlash from both the public and lawmakers in the days after Hurricane Maria when he tweeted about NFL protests instead of helping Puerto Rico. Critics slammed Trump for his relief efforts for the U.S. territory compared to the federal aid given to residents in Florida and Texas after Hurricane Harvey and Irma slammed the country last month.

Cruz has said while she appreciated the aid given to San Juan, she urges the president to step up his relief response and that there are "77 other towns waiting" for his to help.

"They're waiting anxiously and will be very grateful to you and to the American people if you continue to step up to the moral imperative that you've taken on all over the world to help those in need," Cruz told CNN. "So help us."

Cruz added, "I know he can do it, because he did it yesterday with San Juan. Somebody heard me, and they just came to San Juan and things started moving and rolling. But this has to happen on a continuous basis with the entire island of Puerto Rico."