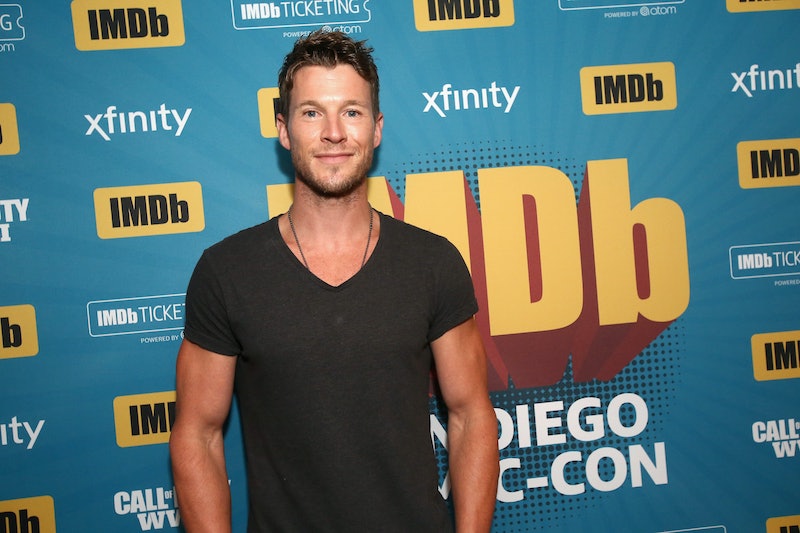 Easter is the perfect time to catch up on everything Netflix currently has to offer, but it can often be difficult to actually decide on what to watch first. For me it seems that the streaming platform's algorithm really wants me to watch the 2017 film Sniper: Ultimate Kill, as it's continuously popping up on my home screen. Well, Netflix I'm intrigued — especially with the pretty dreamy actor on the title card. So who is Chad Michael Collins, and why does he seem so familiar?

Before moving to Los Angeles to pursue a career in entertainment public relations, Collins was born in Canajoharie, a small town in the state of New York as his official site explains. The actor studied journalism at Ithaca College, working for a PR firm in Hollywood for a few years before being convinced to take an acting class by a "successful talent manager and producer [the firm] shared a client with." Collins didn't jump into an acting career straight away, as he only considered it a hobby as he continued his PR and freelance writing career.

He balanced his career and hobby for a while, but it wasn't long until he began to notice that he was being offered bigger roles and budgets. As his site explains, "it became clear to him that he had found his calling: playing pretend for a living." After being cast in recurring roles and as a guest star on a multitude of shows (including Once Upon A Time, MacGyver, Blue Bloods, CSI, Bones, and Castle), Collins was cast as the lead role in Sony's 2011 reboot of Sniper — a film originally released in 1993 starring Tom Berenger and Billy Zane. Collins would go on to play the estranged son of Berenger's character Thomas Beckett for four films including the latest in the series, Sniper: Ultimate Kill.

It's a bit strange that Netflix UK only has the seventh instalment of the Sniper series on the platform, it's not that necessary to watch the entire series to make sense of Ultimate Kill. Each film in the series follows — you guessed it — experienced snipers who are part of the U.S. Marine Corps' Force Reconnaissance (FORECON) who are deployed on missions to assassinate the likes of rebel leaders, terrorists, and drug lords.

Originally cast to play the younger version of Berenger's character in Sniper: Reloaded, Collins fit into the role of Brandon Beckett perfectly especially since he's a fan of the first film. "I saw the first years ago, shortly after it came out. I dug it, but I like military action films in general, as I'm a big fan of the sub-genre," he told horror site Arrow in the Head. "But c'mon — Tom Berenger, especially after Platoon, is just the picture of the rugged, stoic soldier. He's great to watch in anything."

While there's no word as to whether there will be an eighth series in the franchise, Collins in certainly open to an adaptation on TV. Speaking to review site Action Reloaded last year, Collins spoke of how fantastic the medium of television can be — especially in the renaissance that television is currently having. "There is only so much you can accomplish in an hour and a half, so I love the long form stuff. I love the chance to kind of dig in a little deeper and play with more layers of character's and seeing where all that goes."