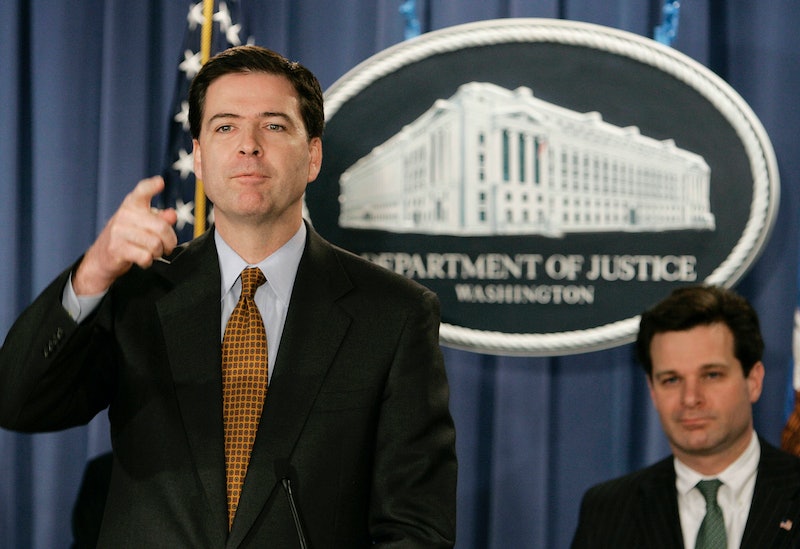 As all eyes are on the president and his relationship with the FBI this week, Trump decided to move forward and announce his pick for FBI director. He announced Wednesday:

I will be nominating Christopher A. Wray, a man of impeccable credentials, to be the new Director of the FBI. Details to follow.

He, of course, made the announcement via Twitter, and with interesting timing. Thursday the former FBI director, James Comey, will end his silence, speaking for the first time since he was fired, in front of a Senate committee.

So, who is Christopher Wray? Trump's FBI director pick has actually worked with Comey in the past.

As reported by NPR, Wray has spent the last 12 years working in private practice at the law firm King & Spalding, where he became a partner. Before that, though, Wray worked at the Justice Department as an assistant attorney general under President George W. Bush. The New York Times reported last week that Wray was in the running for the job, one of two candidates Trump was considering.

In that report, the Times noted that Wray oversaw the criminal division of the Justice Department in those years. "The Criminal Division develops, enforces, and supervises the application of all federal criminal laws except those specifically assigned to other divisions," according to the department's website.

Wray's King & Spaulding biography also notes that while at the DOJ, he "helped lead the Department's efforts to address the wave of corporate fraud scandals and restore integrity to U.S. financial markets." He also led the Enron Task Force and played a role in the response to the 9/11 attacks.

It is during those years at the DOJ that Wray would have worked under Comey. That's because before becoming director of the FBI, Comey was the deputy attorney general under John Ashcroft. Wray would have reported to Comey, and there are photos from a press conference during those years: here, Wray is photographed standing behind Comey as he announced a settlement the government reached with AOL to close fraud investigations. Those investigations would have been carried out by the criminal division that Wray oversaw.

Still, it isn't likely that this relationship is why Trump picked Wray; instead, he appears to have a possible connection to the president through Gov. Chris Christie, a Trump ally. In the Bridgegate trial, Wray represented the embattled governor in the scandal over closing lanes of a bridge to a city whose mayor refused to endorse Christie. The governor was never charged with a crime, but some of his deputies will serve jail time.

Ultimately, though, Wray's appointment will likely be seen as a positive one by those at the bureau. The Times reported that it will "likely to allay the fears of FBI agents who worried that Mr. Trump would try to weaken or politicize the FBI."

As for the "impeccable credentials" that Trump mentioned, Wray also served as assistant U.S. attorney for the northern district of Georgia beginning in 1997. He joined DOJ leadership in 2001.

As for Comey, he will answer to the Senate Intelligence Committee on Thursday. That could have bigger implications for the president, as the former FBI director is expected to answer questions on whether there was pressure from the White House to close the Russia probe that is now being overseen by special counsel Robert Mueller.

When it comes to the FBI and the president's relationship, this week could well prove pivotal in more ways than one.